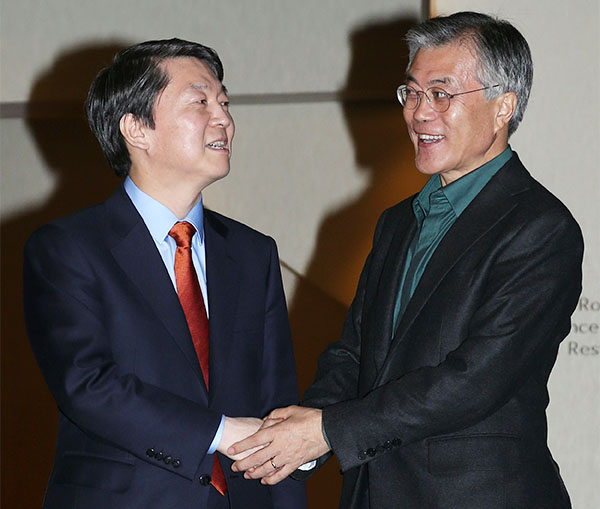 
The liberal front-runners, Moon Jae-in of the Democratic United Party and independent Ahn Cheol-soo who have had conflicts over merging their candidacies, yesterday agreed to resume negotiations after the main opposition party’s leadership resigned out of responsibility for the delay, a month ahead of the presidential election.

They had a closed-door, one-on-one talk last night at a local restaurant in central Seoul for about 20 minutes and decided to resume the daily, working-level negotiations between their closest aides from today, to develop a plan to field a single liberal candidate in order to beat the ruling party’s candidate Park Geun-hye. 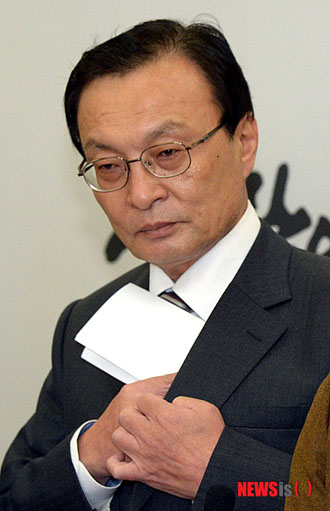 Moon said yesterday he will let Ahn’s camp decide the conditions regarding their merger to get Ahn to return to the negotiation table.

So far, the DUP has called for a nationwide vote via mobile phones to decide on a single liberal candidate, in which they can mobilize their 1.9 million party members, while the independent candidate wanted private polling.

“I will totally let Ahn’s camp decide the rules to field a single candidate, do whatever they want, such as an opinion poll, a vote by committee or an open primary,” Moon said.

“I got the message from Lee and the leadership’s resignation,” Ahn said.

“But what we really wanted was not a change in people [in the leadership], but in political practices. We called for a reform in the DUP and in the procedure for a seamless candidacy merger.

“However, we respect his bold decision by sacrificing himself,” Ahn added. “I will realize the merger by putting myself totally on the line.”

There’s only a week left until the presidential hopefuls are required to register their candidacy with the National Election Commission on Monday.

Technically, if they can’t determine the single liberal candidate by the deadline, they should separately register themselves, and the ruling party’s Park will have two liberal rivals in the December race.

The negotiation between the two liberal front-runners had dragged on for five days, until Ahn’s camp refused to continue the talks.

Ahn has said the nation’s second largest party was trying to mobilize a massive number of its members to manipulate private polls in favor of Moon and spread false rumors that Ahn would concede his candidacy.

The feud between the two liberals had escalated by Saturday, as they started to lash out at each other.

Ahn demanded the DUP “show the will to act on implementing such political reforms,” while Moon said Ahn was misunderstanding something and receiving distorted reports by his camp.

However, suddenly, the DUP’s Lee stepped down, changing the atmosphere.

Lee announced yesterday that he and all Supreme Council members of the party will step down to restart negotiations for a single liberal candidate to beat the ruling Saenuri’s powerful candidate Park Geun-hye, thawing the frosty relations between the two candidates immediately.

“Many people dissuaded us from stepping down, saying it’s unfair,” Lee said.

“However, the reason why we decided to step down is because merging the candidacies and changing the current administration is so desperate and important, and we [the leadership] shouldn’t be an excuse to refuse or delay the merge.

“Additionally, I can’t see Moon agonizing about the negotiation anymore,” he said.

“I want to be a stepping stone for the administration transition and the single candidacy.”

Lee asked Moon and Ahn to respect the two former presidents and their aides.

“I want you to respect the two former presidents, Kim Dae-jung and Roh Moo-hyun,” he said.

“Calling the DUP ‘an outdated party’ and condemning the former loyalists as ‘those to be cleared out’ is an insult to the two presidents.”

Because of the sudden resignation, Moon will be the chairman of the party until new leadership is elected, the DUP said.

However, the floor leader Park Jie-won will remain for a while to attend an ongoing regular session at the National Assembly.

Although Ahn said what he really wanted was not a change in people, a string of Ahn’s aides told the JoongAng Ilbo that some inner-circle members of the DUP, who are mostly former aides to the two ex-presidents, Kim Dae-jung and Roh Moo-hyun, were controlling the negotiation behind-the-scenes, including Lee, and they wanted them to step down.

“In fact, all of the negotiation strategy and the negative campaigning against Ahn is led by Chairman Lee and his confidants,” an official at Ahn’s camp told the JoongAng Ilbo on Friday. “Resolving the matter of Lee’s presence is an essential requirement [for the resumption of the talk].”

“If all of those families of Roh loyalists are not cleared out, reforming the DUP can’t be realized, even if Ahn joins the party,” another aide to Ahn told the JoongAng Ilbo.

Ahn himself didn’t have a good relationship with Lee.

On Oct. 9, in a radio interview, Lee said, “There’s no example in the world where an independent candidate won a presidential election and went on to run a nation in a democratic country,” which ignited anger from Ahn’s camp.