Jeju now gets more than 1 million Chinese a year

Jeju now gets more than 1 million Chinese a year 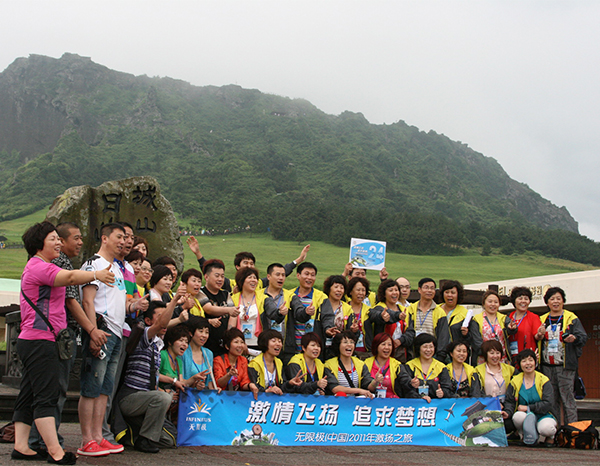 A group of Chinese tourists pose for a photo at Jeju’s famous Seongsan Sunrise Peak in Seogwipo earlier this month. The number of Chinese coming to the island for sightseeing reached the one-million mark for the first time Thursday, a 10-fold increase from 2004, when the number first topped 100,000. Provided by the Jeju Provincial Government


Jeju Island has been visited by more than one million tourists from mainland China this year, the first time ever, the Jeju Provincial Government reported yesterday.

On Thursday, the number of Chinese tourists touching down on the island hit 1,003,254 for the year. 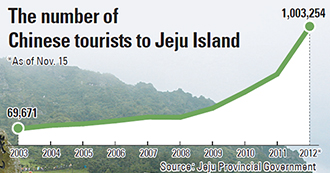 The daily average of Chinese tourists coming to Jeju is now 2,500, more than double last year’s. Total arrivals were 500,014 by this time last year.

The one-million milestone is a 10-fold increase compared to 2004, when the number of Chinese tourists first topped 100,000.

The jump in Chinese tourists is partly attributed to a change in the immigration system in 2008 that allows Chinese to come to Jeju for up to 30 days without visas.

Jeju’s status as a Unesco World Natural Heritage site as well as its selection as one of the world’s “seven wonders of nature” last year have also helped.

The popularity of Hallyu, or the Korean Wave cultural exports, are also factors in attracting tourists.

And the recent territorial dispute between China and Japan over the Diaoyu Islands, known as the Senkakus in Japan, is thought to have diverted some Chinese from vacations in Japan.

“Around 500 to 600 Chinese tourists come here every day looking for makeup products used by Korean celebrities in dramas,” said Jung Jin-hwa, who runs a cosmetic shop in an underground shopping mall in the island’s downtown.

There are now 30 direct plane routes connecting Chinese cities and Jeju. The number of Chinese who visited the island on cruise ships this year more than doubled over last year to reach 104,000.

It already had centers in Beijing and Shanghai.

“After Jeju Island was picked by the Chinese travel magazine TravelWeekly as the best place for honeymoons, we will continue our efforts to better host Chinese tourists with a new package of programs as well as increased transportation on the island,” said Han Dong-ju, director of the cultural, tourism and sports division at the Jeju government.