Divining the complexities of a president’s faith

Divining the complexities of a president’s faith 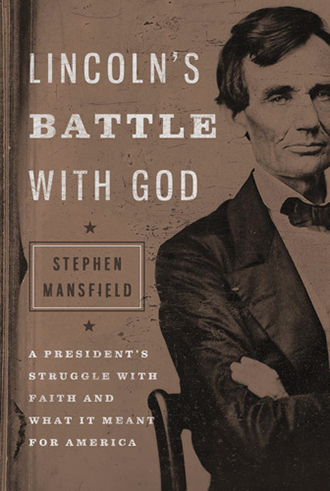 Lincoln’s Battle with God: A President’s Struggle With Faith and What It Meant for America

He has previously explored the faith of Barack Obama and George W. Bush, and now Stephen Mansfield takes on the complex and fascinating religious life of Abraham Lincoln, who went from fiery atheism in youth to such deep conviction that his second inaugural address could be called a sermon to the nation.

Textbooks often freeze and simplify Lincoln’s religious outlook, making him merely a “skeptic, ever religiously uncertain,” Mansfield writes in “Lincoln’s Battle with God.” “The truth is that Lincoln was, in fact, a religious pilgrim.”

There’s no end to books parsing the 16th president, and even Lincoln’s faith has had many thoughtful explorations. The value of Mansfield’s study is its sharp focus, its detail about those who influenced Lincoln and the author’s willingness to let some aspects of the president’s belief remain not fully resolved.

“Lincoln’s Battle with God’’ dismisses those determined to shape Lincoln in their own religious image, whether deeming him godless or a “true Christian.’’

Following Lincoln’s journey through life, it’s a revelation to read how candid and forthcoming he could be about the state of his mind and soul.

A lifelong sufferer of depression, he wrote as a young man, “If what I feel were equally distributed to the whole human family, there would not be one cheerful face on the earth.’’

In his 20s, freed from the strict Calvinistic beliefs of his father and other youthful religious influences, including the wild enthusiasm of revival meetings, Lincoln for a time vehemently and publicly rejected the religious givens of contemporary America.

Devouring freethinkers such as Thomas Paine and Scottish poet Robert Burns, who scoffed at fake piety, Lincoln became known for his hard line. But when he went so far as to write a “little book on Infidelity,’’ attacking the divinity of Christ and the inspiration of the Bible, and then announced that he hoped to publish it, “friends were mortified,’’ Mansfield writes.

Believing publication would kill a promising career, one admirer “snatched it from Lincoln’s hand’’ and burned it.

This early, fanatical anti-religion “makes us wonder if the fuel of this heat wasn’t some other hatred entirely,’’ Mansfield says, suggesting it could have been rage against his father or petty preachers, or even against a God that had allowed the deaths of his mother, sister and sweetheart.

The author suggests “honest Abe’’ became less than fully so as he entered politics; a campaign handbill denied he’d ever “scoffed’’ at religion.

But Mansfield notes other factors besides political calculation that coincided with changes in his faith. He continued to study the Bible, a habit learned from his mother. Though he never joined any church, he attended Sunday services of his wife’s Presbyterian congregation in Washington and even a Tuesday evening prayer meeting, listening from the pastor’s office so as not to be distracted.

The death of his beloved son, Willie, in the depths of the Civil War might have turned Lincoln permanently from God, but instead confirmed his religious quest, Mansfield argues. Insistently, he asked clergymen for guidance about “the state of the soul after death.’’

He came to see the unrelenting carnage of the Civil War as God’s judgment and punishment for slavery, as he says in his second inaugural.