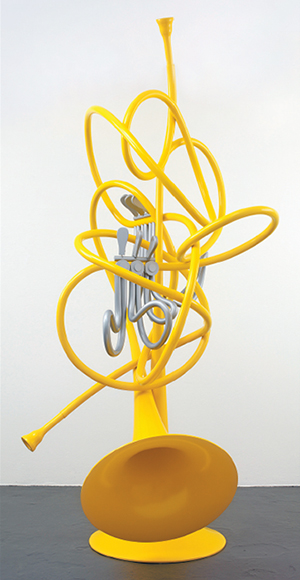 From the massive spoon holding a giant red cherry arching over a pond at the Minneapolis Sculpture Garden to a 45-foot-tall clothespin outside Philadelphia’s City Hall, Claes Oldenburg and his late wife, Coosje van Bruggen, were masters at using public monuments to transform ordinary objects in extraordinary ways.

Koreans can now explore the world of Oldenburg and van Bruggen without having to travel to Minnesota or Pennsylvania.

Forty-three works are part of the “Claes Oldenburg and Coosje van Bruggen” exhibition at PKM Trinity Gallery in southern Seoul.

“Our gallery proved too small for the two sculptures, which are more than 3 meters [9.8 feet] tall,” says Hur Si-young, director of the exhibition.

“We were looking for a wider place and somewhere hustling and bustling so that more people can enjoy the sculptures. Times Square was the best fit because it has a spacious area and attracts lots and lots of people.”

Koreans may feel a unique bond with the pop art display as the exhibition shows how one of Seoul’s most popular landmarks “Spring” (2006) came into being. The gigantic seashell-shaped sculpture created as part of Cheonggye Stream restoration project was initially intended to be a drip of water.

“Like a lot of other artists, the draft sketches contain a lot of concepts,” says Joseph Baptista, a director in charge of Oldenburg’s art at Page Gallery in New York. “The first sketch, as explained to me by Oldenburg, envisioned ‘Spring’ as a drip of water from which the Cheonggye Stream flows and the final form embodies this drip idea.” 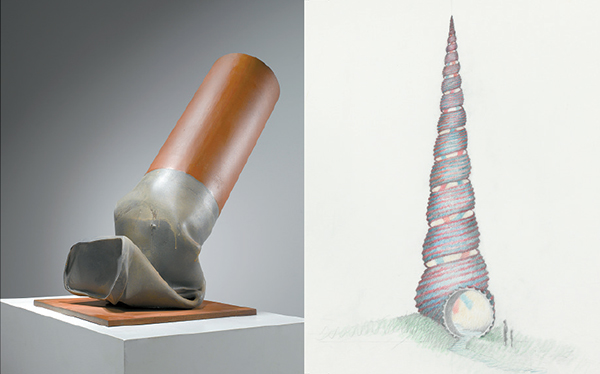 
Alongside the drawings, which are being seen for the first time in Korea, are small sculptures that demonstrate Oldenburg and van Bruggen’s playfulness and sense of humor.

“Knife Ship” (2008) is a miniature version of a 41-foot-long public monument in the form of an aquatic Swiss Army knife with motorized blades and corkscrew and eight oars.

Designed as a landlubbing piece of art for Basel, Switzerland, the knife acquired nautical gear when Oldenburg and van Bruggen decided to use it as the centerpiece of a 1985 multimedia event, “Corso del Coltell” (“The Course of the Knife”), and sailed it down a Venice canal.

A second version of “Knife Ship” is installed at the Museum of Contemporary Art in Los Angeles where its mobile corkscrew, opening blades and paddling oars entertain visitors.

The soft replicas of music instruments are constructed from canvas, wood, resin and latex paint, gracefully echoing the female form and suggesting a mournful, contemplative pose with legs curled underneath.

The artists’ playful side is apparent in the giant cigarette butts that have fallen out of an ashtray in “Fagend Study.”

* The exhibition continues through Jan. 15. The gallery is open 10:30 a.m. to 6 p.m. Monday to Saturday. Go to Apgujeong Station, line No. 3, exit 2. The gallery is in the Trinity Place building across the street from the Galleria Department Store’s east wing. Admission is free. For more information, visit www.pkmgallery.com or call (02) 515-9496.