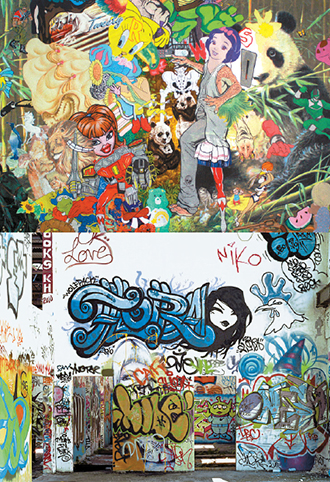 Those who see Japanese artist Ai Kijima’s works hanging on the walls of the Columns Gallery in Itaewon-dong, central Seoul, might think they are just common Pop Art paintings. But a closer look reveals that they are quilts.

In addition, the various pop culture likenesses shown on the pieces - ranging from Japanese animation characters to American professional wrestlers - are all from second-hand fabrics, including T-shirts, carpets, shower curtains and children’s bed covers, gathered by the 42-year-old artist.

“I intentionally collect all my fabrics from thrift stores and flea markets, feeling the irony that the images of pop culture icons on the fabric were so beloved once and then discarded so easily,” she said at the opening of her solo show at the gallery last week.

Like this, her works take viewers on a tour of the pop culture that has accompanied people’s everyday lives over the past several decades and the transient pop icons that have shone briefly.

Along with Kijima’s solo exhibition on the first floor, the gallery is holding a solo show of American photographer Brian McKee on the second floor.

The show includes the 35-year-old artist’s latest series, “Terra Nova,” which captures graffiti on buildings that were constructed during the Cold War and then abandoned after the fall of the Berlin Wall.

It is closed on Monday. By subway, go to Itaewon station, line No. 6, exit No. 2 and walk five minutes. The gallery recommends advance reservations.