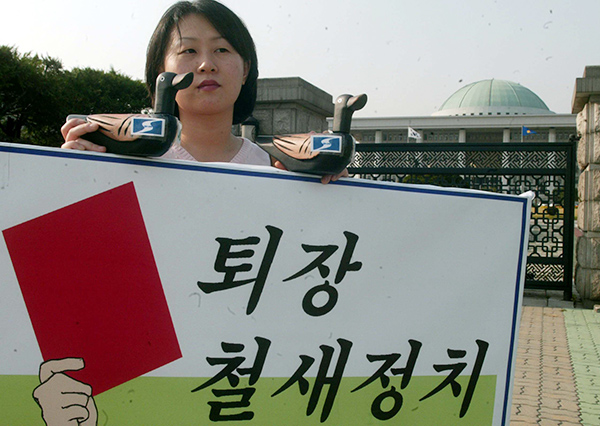 Park Geun-hye, presidential candidate of the ruling Saenuri Party, is a good politician. It is her surrounding cast that is the problem, so said her formidable rival Ahn Cheol-soo in an interview with the JoongAng Ilbo. He parsed his competition separately from her group of followers.

What does he mean by the forces behind or around her? They would serve as the launching pad helping to thrust the political figure to the orbit of power. They make up the candidate’s political clout and networking resources.

They also become the manpower pool for the candidate. The candidate owes followers for their loyalty and service. Once elected, he or she would have to reward them. To some extent, the candidate is indebted to the insider group of followers.

The equation does not simply apply to Park and her camp. It goes the same for Moon Jae-in and his Democratic United Party.

The strife between the two liberal camps over talks on the merger is also a clash of different forces of power. The disagreement between the two candidates is only the tip of the iceberg.

Ahn, too, leads an army of foot soldiers. He says he owes nothing politically-speaking. But he is naive to think so. You cannot engage in politics all on your own. Whether intended or not, he would have been indebted to many people in the process of getting into the presidential race.

His debt may be lesser than his contenders, but the fact is he will still owe people. He is selling promises on the campaign trail to win voters, which are credit in a sense that he needs to honor them when elected.

Being Busan-born, he pledged various benefits to people of the archrival Jeolla region - which again are checks that he needs to repay. If he wins the single candidacy from the liberal camp, he would owe greatly his rival Moon and the main opposition DUP.

Ahn, however, claims he is a horse of another color. He attacks the conservative Saenuri Party as well as his potential merger partner DUP as the old guard. If the DUP is so passe, what is he doing discussing partnership? What part of the DUP is so new that it interested him in considering a merger?

Since mingling with the old crowd, he has become no different from mainstream politicians. A politician who jumped ship to climb aboard Ahn’s recently called the head of the DUP a “rotten tooth,” blaming him for the faltering merger negotiations. The members of Ahn’s team are calling their peers names. They are as aggressive and fight-prone as mainstream players. The fact that Ahn agreed to join hands with the main political party “of the old school” underscores the will to get to the top of Ahn’s team.

I am not saying they should not unite. It is up to them to do so regardless of what people think and say. They will probably end up getting hooked-up because the odds of beating Park are slim if they run separately and split the liberal votes.

But they are fooling themselves and the voters if they bundle up a different mix of team members and package them as an innovative convergence. They are playing by the same old do-whatever-is-necessary-to-win game strategy.

Ahn is still new to the game. He talks constantly about new innovative ways. But the team members he chose to accompany him are not. There are new faces, but most come from the old school. They are a strange mix of conservative and liberal members. It is in one sense an experiment of convergence, but in another sense a grouping of convenience. It is doubtful that they have been reinvented and reset under Ahn’s innovative mind-set and rule.

The people in Ahn’s and Moon’s camps are the same. Many of them flocked to the camp either because they had no better place to go or they were flattered by the invitation.

None are better than the other. They turn into calluses, thickening and hardening on the layers of the political landscape. A strong demonstration of will and actions are needed to pare them down to make room for a new skin.

A ruler in nature wants to surround himself or herself with loyal subordinates. One can borrow talent, but not loyalty. But self-indulgence can breed rotten teeth.

In Busan, where both Ahn and Moon are from, rumors are running wild about who will head to the cabinet and who will go to the presidential office. It is again the old way of mob politicking. It should not matter where the president comes from, whether it is Gangwon or Jeju.

But if one acts as a ringleader, it is unavoidable. If one does not draw a clear line with the group of supporters, one cannot avoid being in their debt. At the end of the day, you might end up broke with a poor taste in your mouth.

* The author is the political news editor of the JoongAng Ilbo.