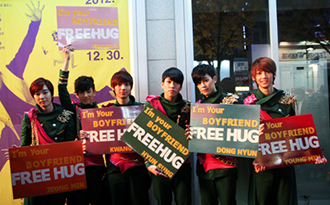 
Idol group Boyfriend set out to hug its fans on Sunday night in central Seoul, but due to the surge of people, the event was canceled.

The group is promoting its first album, “Janus,” and had planned a “Free Hug” on the streets of Myeong-dong, but more than a thousand people turned up for hugs and they had to relocate to a bigger area.

However, even with the relocation, there were just too many people.

The Hallyu group is no stranger to unusual publicity events. In May, to mark its debut, the six-member group held a press conference inside a submarine.

At the event attended by 250 members of the press, the boy band talked about plans for its new single as well as its upcoming showcase.

When the press asked the band about the meaning of its name, Dong-hyun replied, “It means that we want to be everyone’s boyfriend.”