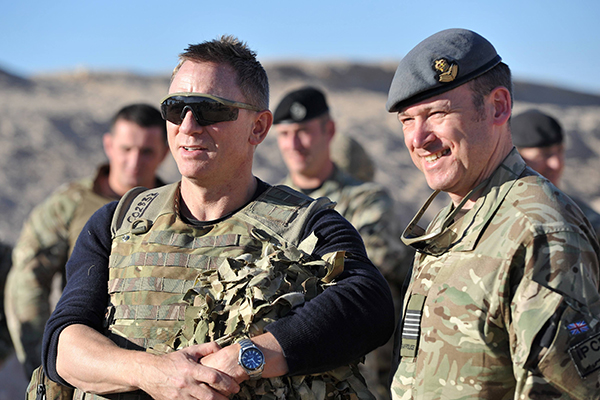 LONDON - James Bond actor Daniel Craig surprised British troops in Afghanistan on Sunday by turning up at Camp Bastion in Helmand Province to introduce the 007 movie “Skyfall” as 800 soldiers sat down to watch it.

According to the Ministry of Defense, after a brief speech ahead of the screening, the 44-year-old actor was given a tour of the camp and met soldiers to see some of the training they underwent before being deployed to forward operating bases.

He also fired some of the machine guns used by British forces in Afghanistan and visited Bastion Role 3 Hospital.

“It was really good everyone’s morale - it’s a decent thing for him to take time to come out and visit everyone here,” said Private Scott Craggs, who is a medical technician.

“Skyfall”, the 23rd James Bond movie in the 50-year-old franchise, is now the highest-grossing installment in the series, with a global box office take of $669 million, surpassing the $599 million taken in by “Casino Royale” in 2006.