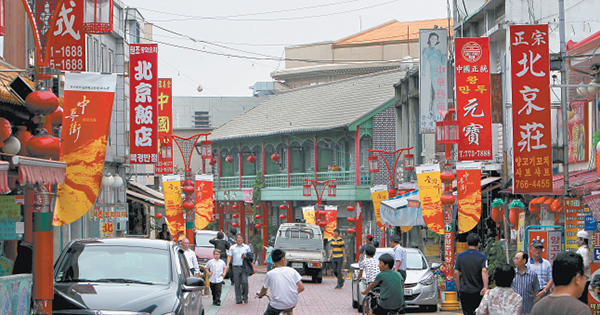 Incheon’s 130-year-old Chinatown, filled with restaurants and grocery stores, has emerged as one of the must-go places in the coastal city and surrounding area of Gyeonggi. [JoongAng Ilbo]


“Thanks to an influx of [visitors] during weekends, goods from China like hard liquor and souvenirs are selling well,” said Chung Ryeong, who runs a business in Incheon’s renowned Chinatown in Jung District. The 46-year-old Chinese woman came to Incheon six years ago and married a Korean, part of the so-called Chinese-Korea group which first settled in the city after the establishment of diplomatic relations with Beijing in 1992.

“Those new settlers choose outskirts of the coastal city to open their businesses as rentals within Incheon’s Chinatown area are pretty high,” says Shei Bao, president of the Chinese Merchant Association.

Chun Yuangchang, whose father moved to Korea during Japanese colonial rule, which lasted from 1910-45, is president of the Chinese-Korea Immigrant Association. He was born in Incheon, went to college in Taiwan and married a Korean. Chun runs an industrial tool manufacturing business and says he has felt a growing acceptance of foreign communities in recent years.

Incheon’s Chinatown is one of Korea’s oldest foreign communities, established by a group of about 40 merchants who followed Chinese army units dispatched by Beijing’s Qing Dynasty (1644-1912) to suppress a military revolt in the Joseon Dynasty (1392-1910) in 1882.

The number of merchants swelled as more Chinese arrived as the Qing Dynasty sank into chaos when confronted with the Imperial Japanese army. Chinese from the easternmost province Shandong established vegetable farms to grow onions, carrots and tomatoes, which were rarely seen in Korea at the time.

Chinese immigration, however, ground to a halt with the victory of the Mao Zedong-led communists in 1949 and the 1950-53 Korean War. Korea’s currency and land reforms also were a constraint on business activity and more than half of the country’s Chinese immigrants left for the United States and Canada.

The revival of the Chinese communities in Korea parallels China’s rise over the past few decades to become the world’s second-largest economy. In the late 1990s, Incheon launched efforts to promote its Chinatown in Jung District as a special tourist zone by redecorating and transforming buildings in traditional Chinese fashion with red-collar pillars and gold-colored dragon statues.

And the city’s efforts have paid off, with Chinatown coming alive with visitors after dark. “When I have important business arrangements, I usually choose Chinatown for such meetings,” says Kim Im-su, who lives in Incheon’s Nam District.