SIWA bazaar brings in loads of cash for charity

SIWA bazaar brings in loads of cash for charity 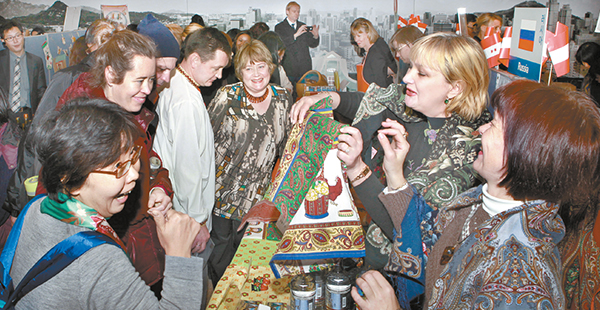 Expatriates look at various items at the 34th SIWA and Diplomatic and Community Bazaar held by the Seoul International Women’s Association at the Seoul Museum of History in Jongno District, central Seoul, on Nov. 13. By Park Sang-moon


A nesting doll, Cambodian teas and vintage watches made during the USSR era - all of these traditional items of countries worldwide filled the large-scale bazaar philanthropy held by the Seoul International Women’s Association (SIWA), in central Seoul.

The 34th annual SIWA and Diplomatic and Community Bazaar took place on Nov. 13 at the Seoul Museum of History in Jogno District, central Seoul, where roughly 4,000 people gathered to obtain the rare items.

More than 40 embassies, several charity groups and other vendors took part in the largest international fund-raising event in the capital to sell various items - homemade cookies, antiques, handmade crafts, clothing and other treasures from around the world.

“I bought some peanuts and cookies, and this is special syrup from Holland,” Ylona Janowitz, a Dutch woman who has lived in Korea for 13 years, said, showing what she purchased at the market.

“This is an Advent chocolate calendar from Germany that children eat each piece every day so that they know how many days are left before Christmas.”

“It’s my 13th time to visit this market,” she said. “It’s good because all of the proceeds go to Korean charities. I was also a member of a Dutch organization that participated in this market for many years. You find some items which you cannot buy at the shops.”

Some of the rare items at the bazaar were authentic objects made during the Soviet Union-era, sold by a Russian vendor.

“All of these items, including watches and paint, were made 25 years ago, during the USSR era,” Andrey Tsygankov, an owner of Zlatex Korea, said. “They are leftovers produced at local factories in the Soviet Union.”

Some Korean teenagers and housewives flocked to American homemade cookies - all kinds of cookies such as peanut butter, chocolate, oatmeal, jam and lots of candies, made by the American Women’s Club of Korea.

“I’ve been participating in this bazaar for 10 years,” Kandy Church, a member of the club, said. “All the ingredients came from the U.S. I went back to the U.S. and brought them back to Korea, carrying them in lots of suitcases, so that I can bake them here.

The bazaar’s welfare committee said all the proceeds go to underprivileged people in Korea, especially for their welfare, not only for their basic living expenses.

The SIWA estimated they raised about 100 million won ($91,659) in proceeds from this year’s bazaar.

“Officially, this year is the 50th anniversary of the bazaar, but in fact, it’s been more than 60 years for us to launch this kind of event,” Hyun Soon, a representative of the SIWA’s Welfare Committee, said.

“Ahead of every Christmas holiday, we have baked homemade cookies, such as ginger bread, by ourselves, collecting traditional items of foreign countries.”

Hyun said that the SIWA has a well-organized donation system, investigating all of the organizations that ask them to help.

“If a local organization asks us for help, we visit them in person to see whether they are in need of help and how much they need,” Hyun said.

“As Korea’s welfare system has expanded, we offer services for welfare of underprivileged people, rather than support for their living expenses,” she said. “For instance, we support handicapped people who want to take a trip or visit a local museum. All kinds of underprivileged people are on our list - blind people, patients with Hansen’s disease, elderly, orphans and North Korean defectors.”