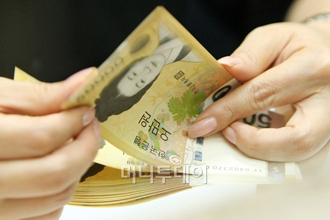 The default rate of the low-credit group is rising fast as they find it increasingly difficult to pay back debts amid the ongoing economic slowdown and lingering global financial crisis, according to data released by local credit appraiser Korea Credit Bureau (KCB) yesterday.

The KCB said an index that measures Korean households’ credit soundness recorded an average 99.84 in the January-June period this year, falling below the 100 mark.

The index, which was first compiled in 2009, is calculated by averaging micro indexes released by the Bank of Korea, the Financial Supervisory Service and the Korea Development Institute with KCB’s own individual credit market index.

KCB said an index number below 100 suggests the level of financial health of Korean households has deteriorated.

It said the number of borrowers with a low credit rating reached 6.52 million people, accounting for 16 percent of the total population, down 0.7 percentage point compared to the end of last year.

The smaller number of people in the low-credit group might cause some to think credit scores have improved compared to the end of last year, but market observers said the borrower’s default rate has increased in almost every credit-rating bracket.

Market observers said the condition of default rate, which refers to the ratio of delinquent borrowers who have defaulted on loans for over three months, has deteriorated, particularly among borrowers in the four low credit brackets.

In separate data compiled by another credit rating agency, Nice Information Service, the number of borrowers who defaulted on loans for more than three months in the January-June period has grown to 2.21 percent, up 0.26 percentage point from a year earlier.