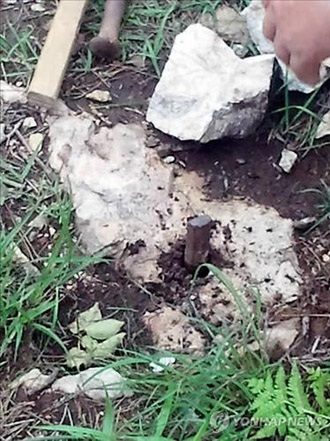 Seen here is a 60-centimeter-long iron stake found at the top of Mount Okmae, in Haenam, South Jeolla Province. Colonial Japan put hundreds of such stakes at major points of Korea "to hurt the spirit of Koreans," according to the historians. The stake in Haenam was removed on Aug. 15, 2012. (Yonhap file photo)

Presenting another piece of solid evidence of colonial Japan's ruthless exploitation policy, the Seoul government on Monday disclosed a report showing that hundreds of Koreans were forced to work in a mine on the south coast to produce mineral resources for Japanese war supplies.

The Japanese munitions company Asada Chemical Industry Co. began developing the mine in Mount Okmae, located in Haenam of South Jeolla Province, 423 kilometers south of Seoul, in 1924 and had collected a large amount of ore by mobilizing hundreds of villagers there, according to the report by the forced laborer investigation commission under the Prime Minister's Office.

South Korea was under the Japanese colonial rule from 1910-45.

"The Okmae mine was developed for the Japanese needs, and all minerals developed were sent to Japan, according to documents we have found so far," said Woo Young-song, a commission official in charge of the project. "We can still easily find traces of exploitation in the mine."

Of diverse kinds of resources from the mine, including alunite, kaolin and agalmatolite, Japan, in particular, hailed the production of alunite, a sulfate mineral that was used for producing munitions and other special war equipment, according to the commission.

"Data, which has the production record until 1936, also shows that the amount of the alunite production in the Okmae mine was overwhelmingly large compared to other mines in the country," he said. "Considering the souring demand for that ore for the Sino-Japanese War in 1937 and the intensified Pacific War in 1940s, the plundering must have grown severe," Woo added.
Of the hundreds of Koreans forced to work in the mine, mostly villagers there, the committee said it has confirmed 94 people who were drafted into the mine in 1942-45.

Some of the miners here were sent to the country's southern island of Jeju to build a Japanese naval base. On their way home following the liberation in 1945, the ship carrying them caught fire, killing 118 out of 225 workers, according to the commission.

As a way of resolving the wartime atrocities, the committee called on Japan to disclose data related to the forced labor in the mine, to designate Asada Chemical as a war criminal company and to set up memorial service facilities for victims.

"The South Korean government also needs to revise a rule of supporting forced laborers who were drafted overseas in order to compensate those who suffered forced labor here," a committee official said.

The Japanese government as well as the companies that used forced laborers have refused to make any compensation, saying all issues regarding its colonial rule, including sex slavery and monetary reparations, were covered by a 1965 package agreement that normalized relations between the two nations. (Yonhap)