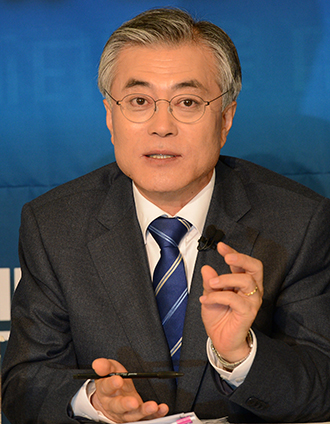 Moon Jae-in, presidential candidate of the main opposition Democratic United Party, speaks yesterday at a panel discussion organized by the Journalists Association of Korea at the Korea Press Center in central Seoul. By Kim Kyung-bin

Presidential candidate Moon Jae-in yesterday said that if he surrenders his candidacy in favor of his independent rival Ahn Cheol-soo and Ahn goes on to win the election, he probably wouldn’t take a position in his administration.

As Moon and Ahn negotiate over who will be the single liberal candidate in the Dec. 19 race, most people assume the man who steps down will be named prime minister or some other important position.

Moon spoke yesterday at a panel discussion organized by the Journalists Association of Korea at the Korea Press Center in central Seoul.

“If Ahn is selected as the single liberal candidate and he beats out the ruling party rival, I will do my best for his new administration,” Moon said. “However, I think working under the Roh Moo-hyun administration was the last time for me to take a certain position under a president.”

However, if he wins the election, Moon said he will appoint Ahn to a plum position.

“I want to treat him nicely,” Moon, 59, said, “because he has received lots of support from people in the country. I want to ask him to help me carry out state affairs in the right way, not just appointing him to a certain position but seeking advice from him on his areas of expertise, such as the IT industry.”

Talks between the Democratic United Party’s Moon and independent Ahn on merging their presidential bids broke down last week when Ahn accused the DUP of dirty tricks against him.

Moon got talks started again Sunday by accepting the resignations of the DUP leadership. Moon also offered Ahn to decide the method that will choose which of them will stand down, but Ahn said that could be negotiated. Moon also said that if Ahn creates a political party, he will consider merging the DUP with it.

“If Ahn’s camp forms a new political party, we can fully consider merging it with the DUP,” Moon said.

“However, at this moment, Ahn is refusing party politics,” Moon said. “In the joint statement [of yesterday], he said he just wants a political coalition. We still don’t know what will happen after the election.”

Moon also repeated that he will let Ahn’s camp “do whatever they want” in choosing a method to decide which man will stand down as candidate.

“If Ahn said they want [opinion] polls, I will welcome it,” Moon said. “If it is too difficult to launch polls, I will meet with Ahn in person and conclude the deal.”

The DUP had said it prefers a nationwide open primary through mobile phones. But as the second-largest party with organizing skills, that method would favor it.

Ahn has said he wants the decision made through opinion polls, where he thinks he has an advantage over Moon.

Although Moon had made a series of concessions to Ahn, he said he isn’t giving up.

“It’s impossible for me to concede [my candidacy to Ahn],” Moon said. “It’s a breach of trust [with my supporters]. I will tell Ahn that I can do a better job in creating a new world and reforming political parties if he helps me.”

Merging campaigns between two rival candidates has been effective in Korean presidential elections both in 1998 and 2002.