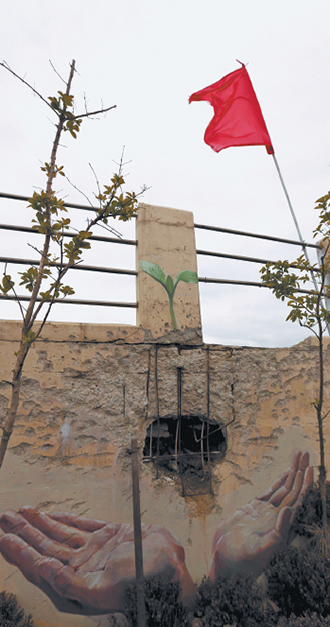 A red flag marks a wall shelled by North Korea on Yeonpyeong Island nearly two years ago, leading to four deaths. The memorial artwork signifies the attack on Nov. 23, 2010. By Shin In-seop

YEONPYEONG ISLAND - Nearly two years since the North’s shelling of Yeonpyeong Island in Ongjin County, Incheon, the island is well on its way to recovery, at least on the surface.

A large crash was heard, causing locals to cringe as they recalled two years ago when North Korea attacked the island by firing 170 artillery shells and rockets in the midst of the South Korean military’s regular firing exercise.

The South returned artillery fire at Mu Island, where the North Korean artillery unit was located.

But this time, the noise was from construction work.

“Whew. I was surprised, thinking another shell was falling,” said Kim Seong-sun, a 73-year-old grandmother who was preparing kimchi for the winter.

She clutched her chest. “Ever since that day, whenever I hear a loud sound, my heart begins to thump and cold sweat runs down my body.”

Friday marks the second anniversary of the shelling of the island off the western coast of Incheon by North Korea on Nov. 23, 2010, which resulted in the deaths of four people - two
Marines and two civilians on the island - and 19 injured.

The island is located near the so-called Northern Limit Line that was drawn up after the Korean War armistice in 1953 by the United Nations Command. The North, however, does not recognize it officially.

Kim’s house was left in ruins because of the explosion, and for a year afterward, she drifted between jjimjilbang, or public bathhouses, and temporary housing provided in front of Yeonpyeong Elementary School. She has taken medication to treat her post-traumatic stress disorder and received psychiatric treatment, but she still suffers from the memories of that fateful day.

“It happened in the midst of making kimchi,” she recalls. “I went to check the cabbage soaking in saltwater in the backyard when I heard a popping sound and saw smoke. Scared, I ran to the refuge shelter. After a long time, when it finally became quiet, I went back to my house but found it to be a complete mess, destroyed.” Tears glistened in her eyes as she soaked the cabbage in saltwater.

Since that day, new buildings and roads have been constructed to replace those that were shelled, and there are more cars on the road and tourists to the island than ever.

When a JoongAng Ilbo reporter visited the island on Nov. 15, construction work was going on everywhere, with nearly every other house undergoing renovations.

Residents like Kim who lost their homes stayed in some 30 temporary housing units set up in front of the Yeonpyeong Elementary School soccer field. That site is now undergoing construction to become the spot of the island’s new elementary, middle and high school campus, slated to be completed by next November.

On the original site of the Yeonpyeong Middle and High School, a 734-square-meter (7,900-square-foot) national security training center underwent final preparations, set to open Friday on the second anniversary.

The center and red flags marking the areas of shelling are the only visible indications that the bombardment happened two years ago.

Aside from rebuilding the infrastructure, since then, the number of tourists jumped from 220,000 per year to 290,000 and counting as of October this year.

“Tourists who can’t find motel rooms rent out rooms that are attached to restaurants. The cost of rooms jumped as well by nearly double,” one hotel owner stated.