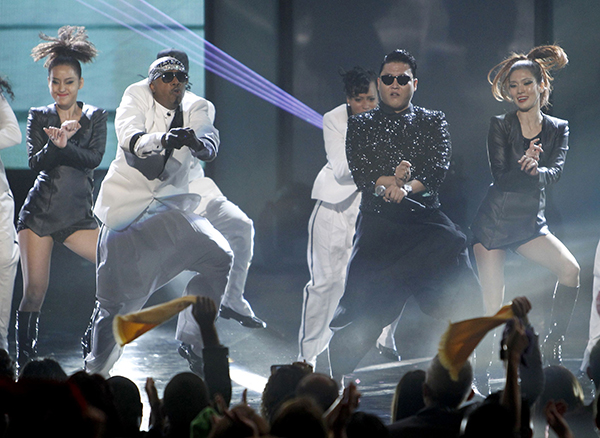 
Every time it seems like the sell-by date for viral phenomenon “Gangnam Style” must have expired, the song reaches another milestone or some high-profile figure keeps the phenomenon alive.

On Sunday, the song’s co-writer and performer, Psy, was presented with the New Media Award at the 40th American Music Awards. People magazine had predicted the win a few days earlier, but that didn’t affect Psy’s excitement level.

“I received the AMAs New Media Honoree Award from Lance Bass!” he wrote on Twitter.

On the morning of the U.S. presidential election on Nov. 6, Barack Obama told a New Hampshire radio station that he had seen Psy’s video and could do the horse dance himself.

“But I’m not sure that the inauguration ball is the appropriate time to break that out,” the president said drolly. He left open the possibility of doing it privately for the first lady, Michelle Obama.

In the four months since the video went viral on YouTube, it has been appreciated and imitated by an impressive roster of global notables from world leaders to sports stars and business tycoons.

British Prime Minister David Cameron and London Mayor Boris Johnson performed a duet of the horse dance for their wives in September during a private gathering at Cameron’s country retreat, Chequers. Johnson went on to reference the event in a keynote speech to the ruling Conservative Party’s annual conference.

Madonna did the dance with Psy at a concert at New York’s Madison Square Garden last week, even crawling through the Korean singer’s legs.

And Chinese artist and dissident Ai Weiwei has gone even further, elevating the “Gangnam Style” dance into a symbol of freedom.

Banned from traveling abroad, Ai posted a “Gangnam Style” homage on YouTube that showed him doing the dance in a pair of handcuffs, a clear reference to the Chinese government’s efforts to silence him.

The video was blocked by China’s Internet censors.

That prompted the Indian-born British sculptor Anish Kapoor to gather 250 art world luminaries at his London studio this week to film their own “Gangnam Style” video in support of Ai.

“Yes, it is desperately silly, but what is the paradigm of the artist?” Kapoor said. “The artist does stupid things with serious intent.”

After Google Chairman Eric Schmidt gave a rather awkward horse-dance performance during a visit to Seoul, Time magazine declared the Gangnam Style craze “officially over.” Time jumped the gun.

“Can anyone kill Gangnam Style?” the Guardian newspaper in Britain asked recently.