After 1997 financial crisis, some Koreans left behind

After 1997 financial crisis, some Koreans left behind 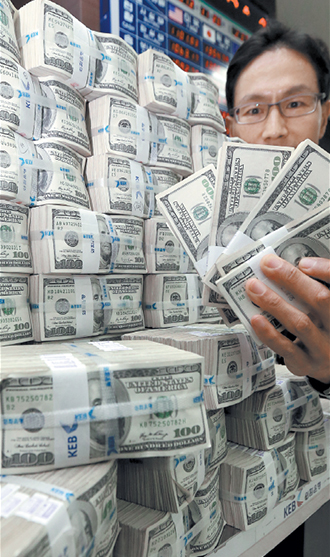 Korea Exchange Bank employees hold up greenbacks at the bank’s headquarters in Myeong-dong, central Seoul, yesterday. Today marks the 15th anniversary of the Korean government’s application for financial aid from the International Monetary Fund during the Asian financial crisis. [YONHAP]

Kim Ye-gyun fries chicken at a modest store in a market in Seoul. You wouldn’t think of it looking at him, but Kim was a victim of the 1997 Asian financial crisis - and remains one.

When the crisis hit 15 years ago, Kim was a 38-year-old banker at Kookmin Bank. In December 1998, he was laid off along with 2,700 other Kookmin employees - 20 percent of the bank’s entire workforce. They were not alone. That year, 97 Korean financial companies, including five banks, closed down. A total of 68,500 in the industry lost their jobs.

Kim tried going into business on his own, but it was a never-ending failure. He opened a gallery, ran a fertilizer factory and started a stationery store. His life steadily deteriorated. In the 1990s, he owned a 99-square-meter (1,065-square-foot) apartment. Today, he and his family live in a cramped two-room apartment on long-term deposit.

Kim opened the chicken store in 2008 thinking he had found his niche, however humble. But a lot of other people had the same idea. There were nine chicken shops in the market then. Today, there are 29. Kim’s just hanging on - on a chicken wing and a prayer.

Today is the 15th anniversary of the day the Korean government went to the International Monetary Fund for help during the financial meltdown. The IMF crisis, as it came to be known in Korea, was a turning point in the country’s history, exposing many of the weaknesses in the foundation of the “Miracle on the Han.” The chaebol borrowed too much and ran their businesses on dangerously miniscule profit margins. Corporate transparency was a joke.

Korea rose from the ashes in only three years, repaying all its debts, and became an international example of surviving an economic and financial crisis. Companies that faced extinction survived through massive layoffs and restructuring to become global competitors with dominant market shares in smartphones, computer chips, shipbuilding and automobiles. 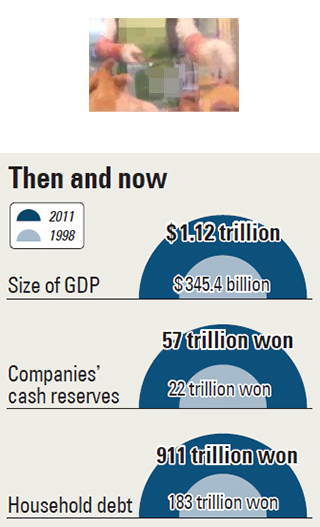 The Fortune 500 includes 13 Korean companies. The nation’s gross domestic product, which was $345.4 billion in 1998, has expanded to $1.12 trillion as of last year. Foreign reserves, which shrank to $20.3 billion in 1997, are now over $300 billion, the seventh-largest in the world. The nation’s debt is 34 percent of its GDP, one-third the OECD average, and its credit ratings were recently upgraded while Europe melts down.

Take a look at Kookmin Bank, the bank that laid off Kim back in 1998. It used the crisis to expand through acquisition and mergers. Last year, its assets were 277 trillion won ($256 billion), five times the level of 1997. Profits were 1.77 trillion won, having grown 17-fold.

But Kim is frying chicken at a market. Tuition for his two college-aged kids drains away all his income. “I can barely pay the rent on the store,” Kim says. “There’s no reserve to save up for retirement. In the past 15 years, I have struggled so hard. But it’s been all downhill.” As far as Kim knows, his plight is no worse than nine out of 10 bankers laid off 15 years ago.

So while Korea long ago rebounded from the IMF crisis and, in many ways, has hit the top of its game, the crisis created a lost generation of Koreans that never managed to pull themselves back to the ranks of the aspiring middle class. Fathers who lost solid jobs are still struggling to make a living, and the middle class has shrunk compared to the mid-1990s. And now, some of their children are giving up hope of finding jobs.

Post-crisis Korea, with its turned-around finances and its newly competitive companies, has moved on, leaving that generation behind.

A joint survey by the JoongAng Ilbo and Korea Research showed that 72 percent of 1,200 participants aged between 25 and 57 agreed that Korea steered through the crisis successfully. Nearly half, or 48.5 percent, said Korea’s economy has improved since the crisis.

At the same time, 91 percent of respondents said conditions for the not-so-wealthy have gotten worse, while 92 percent said the general public was sacrificed in the efforts to overcome the IMF crisis.

During the same period, the lower income class went up from 7.7 percent to 12.5 percent.

“Once they tumble into poverty, there are a lot of families that stay in poverty due to a lack of social welfare networks or programs that would help the laid off find another job,” says Ahn Sang-hoon, a Seoul National University professor specializing in social welfare.

A 47 year-old man surnamed Baek, who lives in Gwangju, is such a case.

In 1997, Baek worked at a medium-sized construction company. When the IMF crisis hit, Baek was out of a job for two years. He too started a small fried chicken shop in 1999.

Four years later, that shop’s doors closed and Baek ended up with 30 million won in credit card debt and a bad credit history.

Since then, he has gone from job to job on a daily basis. Last year, he started a small business but still lives in government housing.

“All I did wrong was get a job at the wrong company 15 years ago,” Baek says.

“I didn’t know my entire life would be so twisted by it. When I look back, the past 15 years have been a nightmare.”

Lee Jang-hyuk, a marketing professor at Korea University, says the unbalanced growth policies that focused all resources on major exporters only got worse after the IMF crisis.

“The gap between those with stable jobs and paychecks and those without only got worse,” Lee says.

While household incomes today haven’t increased much, debts are mounting.

But total household debt in Korea grew from 183 trillion won in 1998 to 922 trillion won as of June this year, an 80 percent increase.

“Most people find it impossible to find a new job after being laid off or retired,” he said, “and they end up losing most of their retirement money by starting small businesses, which fail.”

“Instead of spending welfare on people who have fallen into poverty, the government has a policy to expand debt through financial programs targeted at low-income families,” says Seoh Geun-woo, senior advisor at the Korea Institute of Finance.

“It’s like the government is creating credit delinquents in hopes of keeping its fiscal balance unchanged.”

Experts like Kim Yoon-tae, a Korea University sociology professor, say the government should focus on policies that would generate jobs such as incentives to small and midsized companies to hire people, or increase welfare for people who run small businesses like restaurants.