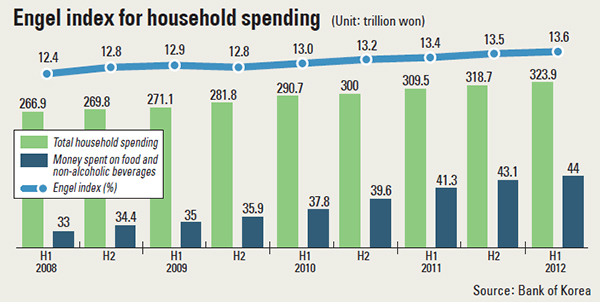 A key index that measures how much of their total income households spend on food reached an 11-year high in the first half of 2012, suggesting that living conditions for most families are getting harder, according to Bank of Korea data yesterday.

A rising Engel index for household spending indicates that the country is getting poorer.

During the same period, household spending on food and non-alcoholic beverages also increased 6.3 percent to 44 trillion won, the data showed.

Food took up 13.6 percent of income, the highest figure since the second half of 2000, when it made up 14 percent.

In the 1970s and ’80s, when much of the population was still relatively poor, the rate hovered between 30 and 40 percent. It fell to the 20-percent range in the mid-1990s, but has continuously risen since the first half of 2008.

“The impact of the global recession is the greatest factor in explaining the rising index. Especially, as the price of agricultural produce climbed significantly due to rising international grain prices, economic sentiment worsened,” said Lee Jun-hyeop, a research fellow at the Hyundai Economic Research Institute.

Excluding food, spending is winding down, according to the data. Liquor and tobacco accounted for just 2.13 percent of household income in the second quarter, the lowest share since statistics were first compiled in 2007.

Clothing and footwear took up 5.1 percent, down from 5.5 percent during the fourth quarter of 2007. Household spending on education was also shown to have fallen since 2008.

“Although household incomes are recovering, households are still reducing their nonessential spending such as by cutting back on their favorite foods, which is a reflection of the current hardscrabble living conditions,” said Shin Min-young, a senior research fellow at LG Economic Research Institute.