Psy and Kim Ki-duk awarded by Ministry of Culture

Psy and Kim Ki-duk awarded by Ministry of Culture 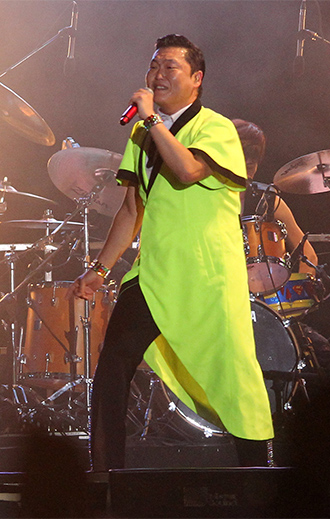 Psy and director Kim Ki-duk were the highest honorees at this year’s Daejoong Arts Award ceremony held by the Ministry of Culture, Sports and Tourism on Monday night.
At the event which took place at Olympic Hall in eastern Seoul, Psy was awarded the Okgwan Order of Cultural Merit, one of Korea’s highest cultural honors, for doing his bit to promote the nation with “Gangnam Style.”

Meanwhile, Kim was named for his Venice International Film Festival award-winning movie “Pieta.” A total of 31 performers and artists were honored by the Ministry.
As Psy is currently Stateside, he was unable to collect his award.
However he did express his gratitude through a recording in which he said, “I am so sad that I wasn’t able to attend and the more I think about it, the more I’m convinced that I’m not worthy of the honor.”
The patriotic singer said that he would keep doing his bit to spread Hallyu far and wide and again apologized and expressed his thanks.

Just two days ago, at the American Music Awards, he claimed another feat in the form of the New Media award, which recognizes entertainers that received props on social networking sites.