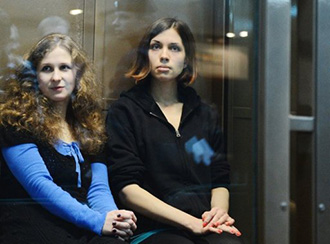 MOSCOW - The two jailed members of Pussy Riot punk band have fired their high-profile legal team and hired the lawyer who helped free their bandmate, the husband of one of the women said Monday.

One of the lawyers who was dropped linked the decision to a verbal sparring match on Friday between President Vladimir Putin and German Chancellor Angela Merkel.

Nadezhda Tolokonnikova, Maria Alyokhina and Yekaterina Samutsevich were sentenced in August to two years in prison after they staged a balaclava-clad performance inside Moscow’s main cathedral mocking Putin.

The initial legal team, which built its reputation defending leading opposition activists, used a political strategy in the trial that saw the three women jailed in August. In October, an appeals court freed Samutsevich after a more pragmatic defense by lawyer Irina Khrunova. Tolokonnikova’s husband Pyotr Verzilov said Monday that she and Alyokhina, whose sentences were upheld, had hired Khrunova for a second appeal.

“Now the interests of Nadya and Masha will be defended by Irina Khrunova,” he said, referring to the women by their nicknames. “It was decided that it would be more sensible to change the lineup of lawyers,” he said, calling it a “joint decision that was worked out calmly” by both the lawyers and the women.

Samutsevich created a sensation in Russia when she dismissed Volkova and hired Khrunova, who successfully argued that guards had grabbed her before she could take part in the anti-Putin performance.

Feigin broke the news that he was leaving the case on Twitter, saying the lawyers had just been refused a meeting with Tolokonnikova in her prison camp in Mordovia. “According to our agreements, we -, Volkova, Polozov, Feigin - are leaving the Pussy Riot case,” he tweeted.