After a long preference for sons, it’s a girl generation

After a long preference for sons, it’s a girl generation 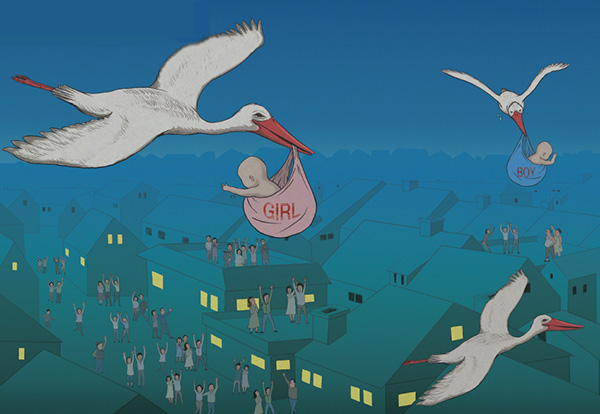 As a mother of two girls, Oh-Han Suk-hee used to have to constantly cope with neighbors, from a grandma next door to her close friends, who all said she needed a son to carry on the family’s bloodline and had to give it one more try.

“One of the common oriental medicines you could easily get from nearby clinics was pouches of a concoction that supposedly helped you conceive a son and abort a girl,” recalls Oh-Han, who has a Ph.D. in women’s studies and is an advocate for women’s rights.

Park Hye-ran, who also has a Ph.D. in feminist studies, experienced an emotional roller coaster ride in a somewhat different way than Oh-Han. Park told the International Herald Tribune years ago that she was often seen as an exemplary woman who fulfilled her foremost duty: providing her husband win not only one son, but three.

But things have changed. Today, says the 53-year-old Oh-Han, “a mother of two daughters or more is the envy of every woman.” And Park, who is 66, says she has gone from “the luckiest woman to a pitiful mother” in just a generation.

Historically, Korea was a rigid male-dominated society on par with China. One of the seven faults of women during the Joseon Dynasty (1392-1910) was not bearing a son, which was ground for divorce. In extreme cases, women were deserted by their husbands or mothers-in-law for not conceiving a son.

In the 1970s and 1980s, women often received underwear worn by women who had delivered sons from their mothers-in-law hoping for grandsons.

But figures and statistics support a drastic social shift: a majority of parents today want girls.

And believe it or not, a list of secret know-hows on how to bear a girl is one of the most popular Web postings for married women. Among the secrets: consuming acidic foods.

Han Jung-ryeol has been announcing “boy” or “girl” to soon-to-be parents for the past 15 years at Cheil General Hospital and Women’s Healthcare Center in Mukjeong-dong, central Seoul, and the obstetrician has seen firsthand the change in reactions to his announcements.

Starting from the 32nd week of pregnancy, Korean obstetricians are allowed to reveal sex of a fetus.

“Reactions are quite different than before. Most parents are delighted when they find out that they will have a girl,” says Han.

A survey last month conducted by the Ministry of Gender Equality and Family backs him up.

In a 1991 survey by the Korea Institute for Health and Social Affairs, 40.5 percent of women said they needed sons.

The sex ratio at birth, another indicator of the centuries-old preference for boys, has narrowed. Most recent data from Statistics Korea says there are 105.7 boys born for every 100 girls. Globally, the average ratio is about 105 boys to 100 girls, as it is in the United States.

Gender imbalance in the years from 1970 to 2000 was largely due to sex-preference abortion, which is illegal, but is still practiced in some clinics. 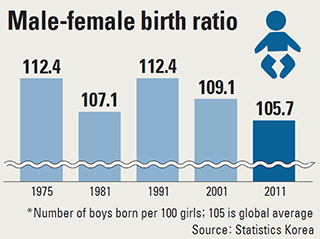 There are several factors behind the rise of girls in modern Korea, but experts credit the changing way that people perceive their children.

In the past, the emphasis was on a child’s function, while these days people think more about the pleasure of raising a child.

“In the past, if you had a boy, it meant having another source of labor in the agrarian society. In addition to that, the most important goal of a family was carrying on the family bloodline,” says Seol Dong-hoon, a professor of sociology at Chonbuk National University.

“But people have fewer children these days, and they have started to care about having close relationships with their children. That’s one reason many parents prefer girls over boys, because it is easier for them to develop a bond with girls.”

Research has found that the part of the brain that is responsible for sympathizing with others is more highly activated in girls than in boys, and couples with girls are more likely to divorce than couples with boys.

Anita E. Kelly, a professor of psychology at the University of Notre Dame, wrote on the Web site of Psychology Today in 2010 that women with girls are less dependent on their husbands because daughters fill the void of absent spouses.

She also added that adult sons tend to be more of a “chore” for their parents, while “women offer more and better social support than men.”

Oh-Han has a similar take on Korean society’s shifting perspective.

“People these days don’t expect their children to feed them when they get old. What they want from their children is not a bowl of rice, but tender loving care,” she says. “Girls couldn’t get education in the past just because they were women, but parents have started to invest in their daughters.

These highly educated daughters get pays comparable to that of their male counterparts, and their financial independence allows them to physically and mentally support their parents even after they get married.”

Professions once dominated by men are now open to women. For instance, 41.4 percent of those who passed the judicial examination this year were women. And there are more women in higher positions at governmental organizations. The Ministry of Public Administration and Security said earlier this year that 420 women passed state examinations in 2000 and became high-ranking public officials; in 2010, that number was 2,143.

With the rise of preference for daughters, middle-aged women half jokingly describe their married sons as “the husband of my daughter-in-law.”

Lee Eun-jeong, the mother of a 16-month-old boy, wants to have a second child, but she is still undecided. “One boy is enough for me. I don’t want to think about having another boy,” says Lee who lives within a 10-minute walk from her parent’s house. She and her younger sister grew up having a close relationship with their mother and father, going to watch movies and musicals, and frequently traveling abroad.

“I asked all my friends who have girls, and they all said they made love at dawn,” says Lee. “Whether it is credible or not, I will definitely consider it if I make up my mind to have a second child.”

Kim Ki-hyun, who has two sons two years apart in age, still remembers the moment she discovered something between the legs of her second unborn child when she went through an ultrasound checkup. She was 13 weeks pregnant.

“I screamed because I really wanted to have a girl,” says Kim. “I still imagine what it would have been like if he were a girl, but I try not to because I don’t want to feel sorry for him.”

Kim juggles work and family, but she is serious when she says she would have a third child if it were a girl.

“Looking at my husband and my younger brother, a parent needs a girl because boys don’t care about their parents,” she says.

Yet even in modern Korea, not all women are free from the duty of bearing a son. Some regions such as North Gyeongsang still have a strong preference for boys. Some also feel pressure from their in-laws when their husbands are the only sons in the family.

Some of them make an extreme decision to head overseas and pay thousands of dollars for pre-implantation genetic diagnosis, which is only available in Korea to parents who have genetic disorders.

In Bangkok or Los Angeles, where the pre-implantation genetic diagnosis is not restricted, women stay there as long as 12 days and use the medical procedure to have a son. It costs $26,000 for two weeks in Los Angeles and covers medical bills, accommodation, airport pickup and interpreter. Bangkok is less expensive.

“I feel sorry for my in-laws because I gave birth to a daughter,” says Lim Mi-ah, who became a mother last month. Her husband is a hard-earned son for her in-laws after three daughters. “If the first were a son, I wouldn’t think about having another child, but now I have no choice but to try again.”