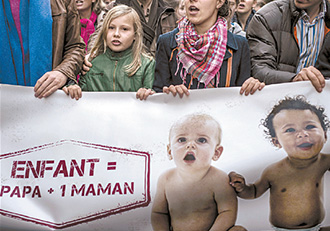 People attend a demonstration against the same-sex marriage on November 17, 2012 in Lyon, central eastern France. France’s Socialist government on November 7, 2012 adopted a draft law to authorize gay marriage and adoption despite fierce opposition from the Roman Catholic Church and the right-wing opposition. AFP Photo

PARIS - Thousands of Catholics and other opponents of French government plans to legalise gay marriage and same-sex adoption marched in Paris on Sunday, a day after more than 100,000 turned out across France for the cause.

The rally, organised by conservative Catholic group Civitas, was marred by accusations that protesters had roughed up journalists and topless counter-protesters partially dressed as nuns.

Police said some 9,000 people had joined the protest, rallying behind slogans such as one large banner reading: “France needs children, not homosexuals.”

“Our objective is to wage a real battle to protect the family and child,” said Escada, whose group claims 1,200 members and a network of some 100,000 supporters.

Senior members of the far-right National Front also took part in the rally.

The protesters included several young people wearing cassocks, a Christian clerical garment. Others waved the French flag and banners depicting the Christian cross and other emblems.

Bertrand de la Buharaye, a pensioner from Dinan in northern France who came to the rally on a Civitas chartered bus, said: “A child cannot flourish normally without a father and a mother. It’s against nature.”

Besides the opponents of the bill, a dozen topless activists from the Ukrainian-based women’s movement Femen had shown up to stage a counter-protest dressed as nuns and chanting “humourous” slogans, said French feminist writer and columnist Caroline Fourest.

“When they moved toward the demonstrators, some of (the protesters) ran after them, raging,” Fourest said in a phone call with AFP from a police wagon, where the women had been taken for their own safety.

She claimed the women were hit by their pursuers, who also lashed out at journalists filming the scene.

Several photographers were roughed up, an AFP photographer said. The local police station said officers had made five arrests.

“There is no place for the extreme right’s acts of aggression in our country,” Vallaud-Belkacem said.

“The government will show no tolerance for this violence.

“We cannot tolerate violence, homophobic sentiments, they are punishable under the law,” the minister said on Europe 1 radio.

She also spoke out against what she called “counter-truths” advanced by opponents of the bill.

“(The idea) that there will no longer be any reference to father or mother in the civil code is completely false,” she said.

“We are not substituting one kind of marriage for another. Marriage as it has been designed for heterosexual couples remains the same but is now being opened to same-sex couples.”

Social Affairs Minister Marisol Touraine said she respected demonstrators’ concerns but that the government was not scrapping its bill, which will be debated by the national assembly on January 29.

Hollande’s government has come under fire from Catholic groups and the rightwing opposition over the bill.

Pope Benedict XVI on Saturday called on the French church to make its voice heard on social issues.