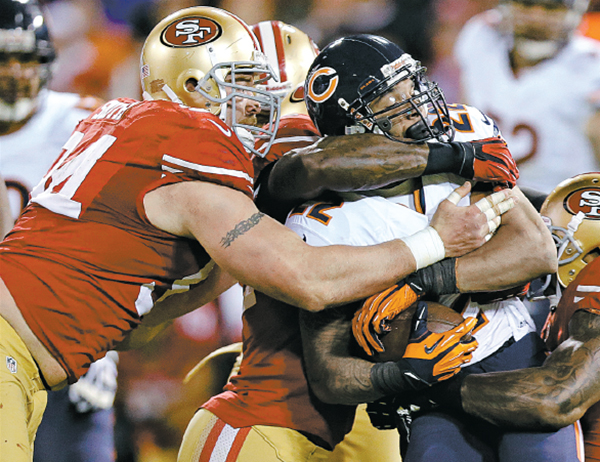 
SAN FRANCISCO - As Alex Smith stood on the sideline with a concussion, San Francisco’s potential quarterback of the future went to work - and fast.

Strong-armed fill-in Colin Kaepernick made all the right throws, looking every bit a capable NFL No. 1.

Kaepernick passed for 243 yards and two touchdowns in his first career start in place of the injured Smith, and the 49ers beat the Chicago Bears 32-7 on Monday night in a highly touted NFC showdown that didn’t live up to the hype.

“It’s everything I could’ve ever wished for,” Kaepernick said. “It feels great just to be out there.”

Jason Campbell, the other quarterback in this matchup of backups for division leaders, threw a 13-yard touchdown pass to Brandon Marshall in the third quarter but was sacked five times and threw two interceptions.

He faced fierce pressure all night on the field for the Bears (7-3) starting in place of Jay Cutler, who suffered a concussion eight days earlier.

After Kaepernick’s stellar night on the big stage, there’s certain to be chatter of a quarterback controversy for the NFC West-leading Niners. And coach Jim Harbaugh is all about competition. “I usually tend to go with the hot hand, and we’ve got two quarterbacks with hot hands,” he said.

Aldon Smith took over the NFL sack lead with 15 and recorded the second-best total in franchise history. Tarell Brown and Dashon Goldson each had an interception for San Francisco’s stingy defense.

Reigning NFL Coach of the Year Harbaugh earned a key victory four days after his own health issue. The 48-year-old Harbaugh underwent a minor procedure for an irregular heartbeat Thursday.

Kaepernick threw for 184 yards in the first half alone - an impressive outing for the second-year pro selected in the second round out of Nevada.

“I think after the first drive I felt really comfortable with what they were doing and what we had in our game plan,” he said. “I really wasn’t too nervous.”