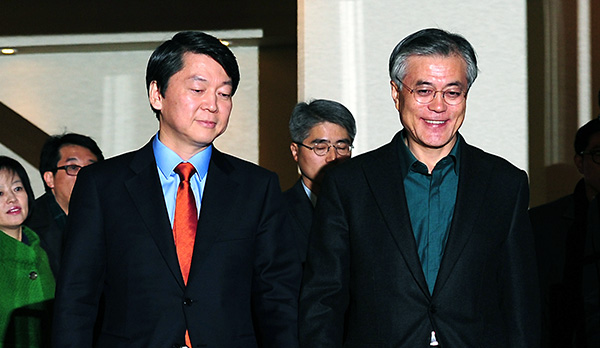 In Korea, everyone understands what you mean when you say “the merger.”

However, when foreign media report on Korean politics, it involves some further explanation. The “process of coming up with a single opposition candidate” is followed by more details. In English or French, there is no term that precisely explains a process that is largely unknown in the political arena anywhere else in the world.

In other countries, especially in the West, a political coalition is a common political move. The U.K. government is a Conservative-Liberal Democrat coalition. In Germany, the Christian Democratic Union, Christian Social Union and Free Democratic parties formed a coalition government. In France, the Socialist Party is the ruling party, but the Green Party and the Radical Party of the Left also have cabinet seats. While coalitions and reorganizations among political parties are common, a “candidate merger” is rare because they don’t negotiate over the prime ministerial or presidential candidates. The discrepancy comes from the difference in the election systems and political cultures.

The parliamentary system is mainstream in Europe, and coalitions take power before and after the general elections. Usually, power is shared based on the number of parliamentary seats won in the election. In order to encourage partnership with the minor parties, a bigger party may make sweet proposals. However, the position of prime minister is never part of the deal.

France has presidential elections, but its system does not require candidate mergers. If the first-round election does not yield a majority winner, a runoff is held. The first round of voting functions as candidate consolidations for the left and right. When only the winners and runners-up are left, the rest of the candidates choose to support one of the winners or remain neutral. In the May election, the candidate of the far-right Front National never endorsed the then-President Nicolas Sarkozy. It was the end of the pact for the right.

A more fundamental difference than the election system is that political coalitions are created with political parties at the center. The basis of the coalition is policy cooperation. Therefore, it is impossible - at least in Western Europe - for a celebrity who doesn’t have policies endorsed by party members and a particular political faction to forge an alliance to steal an election victory.

The Netherlands has a politician similar to Ahn Cheol-soo; his name is Diederisk Samson and he is 41 years old. He is an environmental activist who studied engineering and was CEO of a green energy company and decided later to enter politics. He also won popularity by making TV appearances.

The difference is that he joined a political party - the Labour Party - eight years ago and became its leader through internal verification and competition.

Party politics is not deeply rooted in Korea and the ruler is decided through a single election, so the attempts of “the merger” will continue in the future. It may become a signature of Korean presidential politics because there are always the second- and third-place winners who dream of surprise victories.

But the time has come to seriously contemplate if it is desirable to have another election focused on “the merger” rather than competition over policy.

* The writer is the London correspondent of the JoongAng Ilbo.