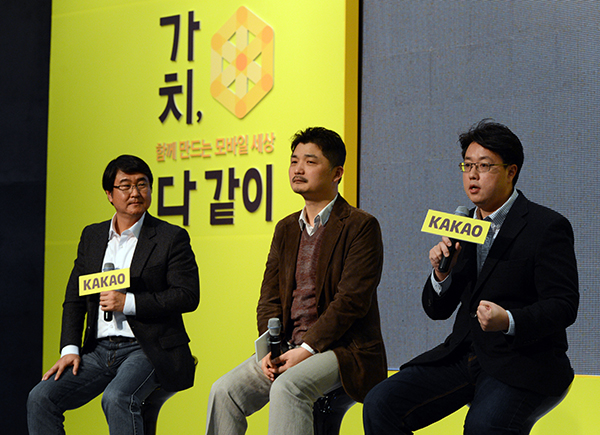 
Kakao, operator of Korea’s most popular mobile messenger KakaoTalk, yesterday unveiled a handful of ambitious new services at the biggest press event it has ever held.

The announcement came as KakaoTalk recently saw the number of its global users surpass 66 million and had a major product score with the phenomenally popular Anipang mobile game.

Reclusive founder and Chairman Brian Kim, aka Kim Bum-soo, made a rare public appearance and said his company’s growth potential may go beyond that of Facebook.

“When it comes to social networking services, Facebook might come to your mind first and I also felt that way,” he said. “But ever since seeing the immense success of Anipang, I came to redefine and rethink social services offered through mobile platforms. The speed of the spread of information and user expansion is more than 100 times on mobile platforms than on the Web.”

Coming from that idea, Kakao unveiled three new services to launch early next year. First is Story Plus, a marketing platform based on Kakao Story, a photo-sharing social networking service Kakao has been running since March 20. Kakao Story is currently Korea’s top SNS with 30 million users - more than Facebook, Cyworld or Twitter. For Story Plus, Kakao will lift the ceiling on the number of friends users can make so small shop owners can use it as a promotional platform.

The second new service is Chatting Plus, which directly brings users into affiliated third-party applications such as maps, a music player and games during conversations in a chat room. For instance, a member of a group chat may launch a map application while discussing a meeting.

“Chatting Plus will enable users to discover a variety of good applications,” said Lee Sirgoo, representative director of Kakao. 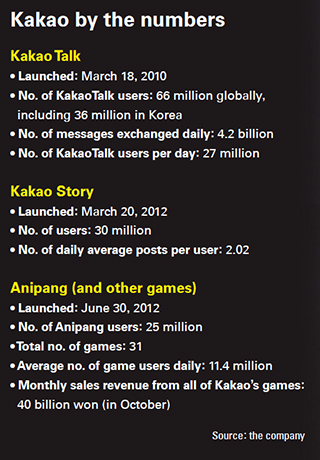 The third new service is Kakao Page, a paid content platform. An individual or group may create their own content in fields ranging from recipes to English education, books and music videos and sell it through their mobile pages linked to their KakaoTalk account. It will be similar to blogs or Twitter posts, but the creators can earn money through the content.

“Among successful social platforms, Facebook has been far from serious in considering the profits of its business partners and we are presenting a different model - doing business based on fair and transparent rules,” he said. “We know there are so many game developers out there that are more than willing to clinch a partnership deal with us even after we offer to give them only 20 percent of total revenue. But we won’t do that. We will definitely establish a structure whereby our partners turn profits.”

When it comes to games and related content, Kakao takes 20 percent of the revenue. In contrast, app developers get 50 percent and mobile app stores run by Google Store and Apple get 20 percent.

On the back of outside investments and surging profits from the games business, Kakao went into the black in September and is expected to see a full-year profit this year for the first time since the company was founded in 2006. But Kakao has no immediate plan for an initial public offering, Lee Sirgoo said.

Kakao-affiliated games, launched at the end of June, have also shown big success achievements. Ever since Anipang, previously only played through a Web browser, joined Kakao, its daily average sales revenues shot up 400 times. Dragon Flight saw its revenues skyrocket a whopping 2,800 times.

Kakao yesterday launched three mobile games - Anipang, Sachunsung and Puzzle - across 216 countries around the world, the first step in its globalization move.

Early next year KakaoTalk will launch a PC version, which its competitor, Line of NHN, already offers. Users with difficulty typing on small mobile keyboards have wanted a PC version.