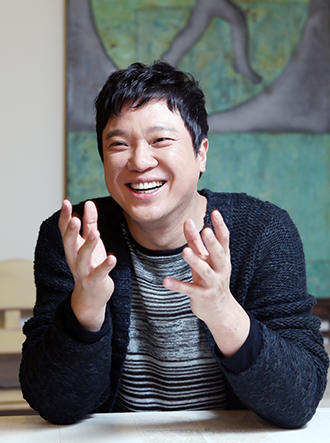 The musical “Les Miserables” was staged for the first time in Korea earlier this month. After seven months of auditions, comedian-turned-musical actor Chung Sung-hwa landed the coveted role of Jean Valjean.

When the news leaked that Chung had the role, there was plenty of skepticism. For many musical fans, Chung, who’s been playing comedic roles, is an unlikely Valjean.

With the first performance on Nov. 3, however, Chung has dispelled all doubts about his ability to handle the role. The audience could understand why the original musical didn’t resort to triple- or quadruple-casting with more high-profile actors and idol signers, unlike other musicals that frequently do that in an attempt to increase ticket sales.

That’s because Chung was the only one who pleased the ears and eyes of Cameron Mackintosh, who produced the world’s so-called four major musicals: “Les Miserables,” “Cats,” “Miss Saigon” and “The Phantom of the Opera.”

Unlike “Les Miserables,” the other three shows have all played in Korea as licensed musicals.

French composer Claude-Michel Schonberg and Mackintosh added a new dimension to Victor Hugo’s classic novel and a musical version was staged in the West End of London in 1985. Since it’s premiere, “Les Miserables” has been seen by 60 million people in 43 countries.

Because it is one of the most successful commercial musicals ever, the original production team wanted to be involved in every part of the production process for the Korean version, from marketing to casting. After the “Les Miserables” creative team arrived in Seoul, it took several months to select all the actors and actresses.

Following is an excerpt from an interview with Chung.


Q. The musical has drawn rave reviews. How do you feel standing on the stage playing the most coveted role?

A. I’ve been dreaming of an opportunity like this ever since I became a musical actor. I felt like I own the world after I landed the role. But now it is different. I’m under a lot of pressure, and I don’t know if I’m doing it right.

Everyone, even elementary school students, is well aware of the story of Jean Valjean. Does it make it hard for you when acting and singing on the stage?

When I was doing another musical, “Man of La Mancha,” five years ago, I realized everyone has a different definition of Don Quixote. Some told me Don Quixote should be crazier, while some others told me I shouldn’t exaggerate his witty side. I’ve gotten the same reaction this time, too. Some said they can’t associate me with Jean Valjean and some simply said they wouldn’t watch the musical because I’m in it. I think everyone has a different definition of Jean Valjean.

You had to audition for the role five times. Why is that?

Scores of the musical are still hard and challenging for me. Take “Bring Him Home,” for example, I still practice it dozens of times a day.

Auditioning for this musical was special. When I sang one of the scores on the first day, they gave me directions and made me sing again. The next day, I sang the song from the previous day and a new song. On the third day, I sang two previous songs and another new one. That’s how we had been building up. All other actors also went through the same procedure. When the audition was completed, every actor grew up and I felt like I could step onto the stage right away.

Your tone is low-pitched and the range of your voice seems more suitable for the role of Javert, the police inspector.

You’re right. Jean Valjean was a challenge for me, but I thought I should go for it when I’m still young. Isn’t it awesome if you can achieve something not with your natural born talent, but with tireless effort?

How did you learn to sing?

I was a member of church choir back when I was young. I used to live in Incheon when I debuted as a comedian in 1994 and I had to drive from Incheon to Yeouido for two hours to get to broadcasting stations. I sang along with gospel music for full two hours while I was driving every single day. I didn’t expect it would bring me such a wonderful chance.

You started with supporting roles in musicals, but how did you end up landing the lead role in “Man of La Mancha?” You turned down the supporting role of Sancho Panza and that’s how you got double-cast for the role of Don Quixote along with Cho Seung-woo, who is one of the top musical actors in Korea.

Looking back, it was a life-changing moment. If I had accepted the role of Sancho, I wouldn’t be here. I told Shin Choon-su, the head of the musical production company, that I wanted to play the lead role. He gave me a chance and I got the role. Shin later told me that he knew I had the potential to play the lead, but he never expected me to come forward like that.

Why did you choose a serious Don Quixote? What did you do to shake off your comical image as a comedian?

I knew people would come to theaters to watch a hilarious version of Don Quixote because I was playing the role. So I made up my mind to betray their expectation as I toned it down. I did it because it’s a way to make people understand the depth of the musical. I can portray the character in a light-hearted way, but I didn’t because I didn’t want the audience to just laugh and forget about it. It’s always interesting to go beyond people’s expectations. For example, I did Ahn Jung-geun (Korean independence activist) in the musical “Hero” and the next role I did was a gay mother in “La Cage aux Folles” and then serious Jean Valjean again.