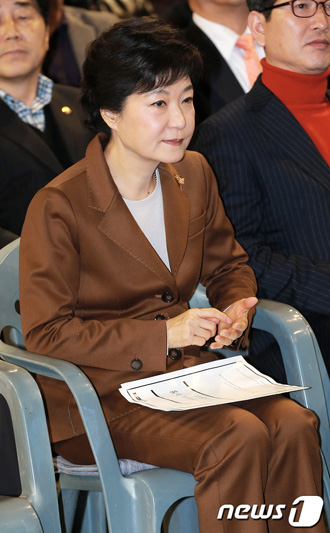 The controversy surrounding a political painting portraying the Saenuri Party’s presidential candidate Park Geun-hye giving birth to her father continued yesterday as the painter and a lawmaker of the ruling party argued over the artist’s intention in a radio program.

Hong Sung-dam, who depicted Park as having just birthed a baby Park Chung Hee - her father and late strongman who ruled the country from his military coup in 1961 until his assassination in 1979 - and Representative Kang Eun-hee of the Saenuri Party appeared on CBS radio yesterday morning and talked about the painting.

Hong was interviewed first and he talked about his artistic intention.

“Fanatical support for a politician isn’t healthy,” Hong said. “We remember clearly the ills created from the obsessive support during the Roh Moo-hyun administration. And for Park, some of her supporters are even deifying her, as if she is a demigod.” 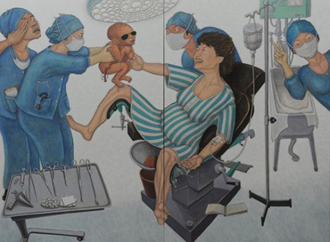 The artist, then, said such a trend is extremely dangerous because it could serve as the basis for fascism and dictatorship in the future.

“So, my intention was to criticize that risk with a simple satirical painting,” he said.

Hong also said he will give up his citizenship if his freedom of expression is not protected in the lawsuits that the Saenuri Party threatened to file against him.

After the artist continued to defend his work, Representative Kang was interviewed and expressed her discomfort and shock toward the painting.

“I felt insulted after seeing the painting,” she said. “It felt like a serious discrimination against woman.”

Kang said it was extremely shocking that Hong chose to depict the moment of childbirth to express an extremely strong political message.

“No woman can comfortably say that this is just political satire,” she said.

Asked if Park had seen the painting, Kang said the presidential candidate probably didn’t have the time because she gave no particular comment about it.

Lee Jung-hyun, a chief public affairs official of the Saenuri Party, used the artist and his work to attack Park’s opposition rival in the presidential race.

“Hong is giving various interpretations about his painting, but it would be better for him as an artist to say that he had launched a negative attack [against Park] on behalf the Democratic United Party’s candidate Moon Jae-in,” Lee said.

“We feel horrified to see the people who are going after the presidential victory by insulting the rival with such immoral, inhumane political satire.”

He then said the painting and the DUP share a common characteristic of radical cruelty and promised that the Saenuri Party will calmly show that Park is a prepared president who will reform politics and open up doors of new opportunities and rights to women in Korea.