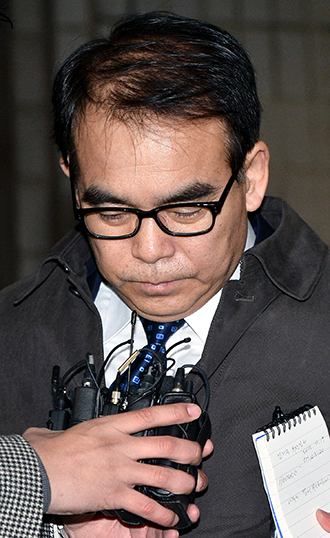 Special prosecutors investigating Kim Gwang-jun, an incumbent senior prosecutor at the Seoul High Prosecutors’ Office who is accused for taking hundreds of millions of won in bribes, now suspect him of receiving a larger amount of money in bribes from corporation officials nationwide than previously thought.

The team now has 13 prosecutors.

Kim is now suspected of receiving about 970 million won ($896,000) in bribes from the Eugene Group and Cho Hee-pal, a notorious pyramid scheme con man, in 2008 when he was assigned to investigate corporations’ irregularities at the Seoul Central District Prosecutors’ Office in 2008.

The team of special prosecutors judge that Kim received money from Cho and the Eugene Group in return for covering up their irregularities.

The team of prosecutors said Kim is also suspected of receiving additional bribes from corporate officials in Busan, Ulsan, and Pohang.

“We have questioned people who are suspected of being related with Kim last week,” a spokesman of the team of special prosecutors said.

At 10:30 p.m. on Monday, the Seoul Central District Court issued a warrant to detain Kim for further investigation. Kim was detained immediately. It is the first time for an incumbent prosecutor to be detained this century.

“We judge that there is a possibility that Kim might attempt to destroy evidence and we’re also afraid that he might escape overseas,” Senior Judge Lee Jeong-seok from the Seoul Central District Court told reporters.

Following Kim’s detention, Prosecutor General Han Sang-dae made a public apology immediately. “I sincerely apologize to the nation as the head of the prosecution,” Han said. “We have no excuses for Kim’s corruption. I promise that the team of special prosecutors will investigate this case thoroughly and also try to develop a stronger inspection system to monitor prosecutors’ corruptions.”

The prosecutor general will have a meeting with high-ranking officials of the prosecution to discuss the organization’s reform at the Seoul Supreme Prosecutors’ Office in Seocho-dong, southern Seoul, tomorrow.

“I don’t trust their words,” a prosecutor-turned-lawyer told the JoongAng Ilbo.