The Asian economic crisis of the late 1990s hit many countries in the region hard, similar to the euro zone crisis of today. In terms of macroeconomics, all recovered and many came out of it stronger, having learned painful lessons about flaws in the way their economies had been built and functioned.

Korea is on top of that list with an economy far healthier, more innovative and more solidly grounded than when it went hat-in-hand to the International Monetary Fund exactly 15 years ago this week.

But as yesterday’s installment in this series demonstrated, a whole generation tumbled from Korea’s middle class during the economic crisis into a more precarious existence in which they are still stuck. And the country’s middle class as a whole ended up shrinking as a proportion of the population after 1997.

In fact, the impact of the so-called IMF crisis, Korea’s nickname for the late ’90s turmoil, is still being felt by three generations: post-Korean War baby boomers who lost jobs at the time, students who had the bad luck of graduating just as the IMF’s boom was lowered and a lot of young adults, some of whom are starting to give up on the best things in life, including dating, marrying and having kids.

Ahn Tae-ho, 31, is one of the “Sampo” generation. Sampo means “three forsakens.” He doesn’t foresee the traditional happiness of family in his future and isn’t even dating. Largely, that’s because he’s never been able to find a steady job.

“I just started late [compared to others], but it feels my opportunities are gone forever,” Ahn said.

Ahn was a high school student when the IMF crisis hit. His father was running a small business in Gangwon, and he remembers how he struggled.

“Many of my friends were attending hagwon [private cram schools], but our family couldn’t afford it,” Ahn said. “It’s something my parents still regret.”

They managed to send Ahn to college in Seoul, although he worked at coffee shops during the week and at a wedding venue on weekends to get by.

But he never landed a job at a company.

He majored in law but failed the Korean bar exam three years in a row. Last year, he started sending his resume to companies, but none wanted to hire him. He couldn’t compare to members of his generation who had more affluent backgrounds.

“Traveling abroad for language training was a given for them, and many attended English- or Chinese-language hagwon,” Ahn said. “Most of my friends spent on private tutors in college like they did in middle or high school.

“It dawned on me, ‘Why would a company give an opportunity to someone who is now 30 and hasn’t even been abroad for language training?’?” Ahn said. “That’s when I decided to give up and started offering free legal consulting for a civic group.”

Koreans like Ahn, born between 1979 and 1987, were emotionally sensitive teenagers when the crisis hit the country. They saw competition get fierce for jobs in its aftermath.

As a result, many are postponing marriages and starting families, as the statistics confirm.

Buying a home is out of reach for someone like Ahn, who doesn’t have a solid career. Ahn has been living in a small rental apartment in Sinlim-dong, southern Seoul, since studying for the bar exam.

Lee Byung-hoon, professor at Chung-Ang University, said there is the possibility that young people, the future of the country, could end up on welfare if something isn’t done to help them.

“More than half of my college friends are temporary workers,” Ahn said. “This is not a generation that could ever buy a home in the greater Seoul area on their own.”

Kim Dong-joon is a member of the IMF generation, aged between 35 and 43, who were young adults when the Asian economic crisis was changing their country completely. The last 15 years have been nonstop anxiety for Kim, 39, who has changed jobs seven times.

The crisis arrived when Kim was about to graduate from a two-year college. The bulletin board that was plastered with job offers in mid-1997 was empty a year later.

Kim didn’t manage to land his first job until 2000. But a year and a half later, he was laid off because the company was being rocked by the aftermath of the crisis. Then he started jumping from job to job: at a software development start-up now, an electronic parts manufacturer later. In 2004, when Korea went through its credit card debt crisis, Kim actually benefitted: He worked at a credit evaluation company. But that didn’t last long, and he was almost glad.

“It was agonizing to deal with customers who were begging us to understand their difficult situations,” Kim said. He finally found a steady job at a stationery goods importer five years ago.

“It took me a long time to finally settle,” Kim said. “This is all because the IMF crisis got me off on the wrong foot.”

People like Kim who were born between 1969 and 1977 are considered Korea’s luckless generation. The IMF crisis began when they were entering the workforce after graduating from college. Since then, they survived the domestic credit card crisis of 2003, the global financial crisis starting in late 2008 and now the euro zone crisis.

“The mid-30s generation has persistently had a low employment rate compared to generations before them,” said Park Se-jeong, a researcher at the Korea Employment Information Service. “They didn’t have much opportunity to find good jobs because major crises erupted at every turning point of their lives.”

Yang Jeong-seung, a researcher at the Korea Research Institute for Vocational Education and Training, said many people in the IMF generation started off at jobs that they didn’t want or like, but they needed the paychecks.

“This is a generation that lost the opportunity to get proper job training at the beginning of their lives in the real world,” Yang said.

And a sudden spike in real estate prices in the mid-2000s has kept many from buying homes of their own. Others are saddled with big mortgages and properties that are underwater.

“To this day I pay 300,000 won every month on interest, but now the apartment’s value has dropped,” Kim said. 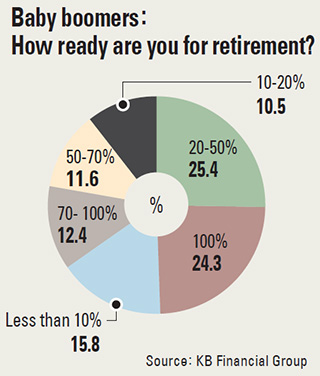 For baby boomers aged between 49 and 57, the IMF crisis changed their lives and the country they lived in. The ones who slid down the slippery slope found a country without the exceptional growth of its past and no secure jobs.

Kim Chang-hwan, 52, runs a real estate agency in Pyeongchang, Gangwon, and a pawnshop in Anyang, Gyeonggi. But he rarely goes to either office. “Why would I when there is no work?” Kim asks.

In 1997, Kim was running his own entertainment business introducing singers to night clubs. The crisis curdled that business: Half the clubs he did business with closed. He started jumping between jobs at construction sites and at real estate agencies.

For baby-boomers aged 49-57, the IMF crisis is known as the time of their first retirements. Finding new jobs was nearly impossible because of their ages. After losing their jobs, some found work in construction or as security guards. Others opened small businesses like restaurants with their severance packages. Many took out large loans.

Kim opened up his own real estate agency in 2008 but instead of clients he found himself facing a new global crisis, this one emanating from the U.S. He said he survived on borrowings from his credit card.

So far this year he only had two real estate jobs. To pay bills, Kim recently started a side job in construction. He gets 90,000 won ($83) a day. His family lives in a 50-square-meter (538 square feet) public housing apartment.

“The baby boom generation has their assets tied up in real estate and their shrinking incomes and falling property prices could become a major problem in the Korean economy,” says Hwang Won-kyung, KB Financial Group’s research center analyst.

More stark is the assessment by Hwang Ga-don, a researcher at Korea Employment Information Service.

“Baby boomers are walking down a one-way road to penury,” he says.