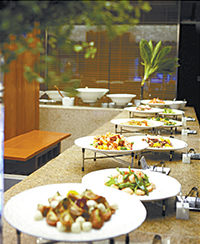 A “Family Special Gala Dinner” will take place at the The Seven Square restaurant in celebration of the completion of the 2012 “Special Food for Your Table” promotion. The event is from 6 p.m. to 9:30 p.m.

Guests will enjoy 13 dishes prepared by the hotel’s head chefs. Menus include Jeju black cattle sashimi and steak, premium pork barbecue and grilled Jeju abalone. A glass of red wine and bottle of Evian water will be provided to each diner.

The price is at 580,000 won excluding tax and service charge.

The hotel’s boutique bakery Delica Hans will also hold the “Jackpot Box” event from Dec.1-3. The Jackpot box is priced at 150,000 won, including tax, and will be limited to 500 sets. Guests can win a diamond necklace, a night in a luxury suite, spa vouchers and other prizes.

The “Winter Love Story Package,” is recommended for couples and consists of a night in an executive room, complimentary breakfast, happy hour at the Executive Floor Lounge, a bottle of wine and access to the swimming pool, gym and sauna. The price is 249,000 won. 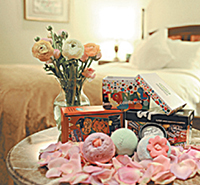 The hotel is presenting the “Winter Aroma Package.” It provides the handmade bathing product “Lush” from the U.K., one night’s accommodations, a bottle of Moet & Chandon, seafood salad, french fries and assorted cheese for room service. Guests are also invited to enjoy the breakfast buffet, indoor swimming pool and fitness center. The price ranges from 220,000 won to 460,000 won, excluding tax and service charge. In addition, if guests buy the package for more than two nights, they can get a 20 percent discount for their third night.

“The Stay Warm Package” offers a night in a superior deluxe room and winter tumblers for two engraved with the logo of the hotel. The package costs 265,000 won.

“The Snow Country Package” includes a night in a superior Deluxe Room, a seven-course meal for two at “Hanazono,” a lavender-scented candle, the novel “Snow Country” by Nobel Prize-winning author Yasanuri Kawabata, or bottles of Demeter perfume. It is priced at 390,000 won, not including tax.

For families with children 4 years old and younger, the hotel offers complimentary baby crib setup, diapers and wipes, bath supplies and special presents when requested in advance. Strollers are available as well.

At the buffet restaurant Cafe Elysee, children under 12 can receive the “Kids Eat Free” benefit where they can eat lunch or dinner for free.

The Chinese restaurant Taipan is inviting guests to taste two set menus of sizzling plate specialties. A la carte selections are also available. The set menus include steamed abalone with black moss, braised sea cucumber filled with minced shrimp, and sauteed hanwoo, or Korean beef, steak with black pepper sauce. They are priced at 105,000 won ($96) and 140,000 won. Tax and service charge is not included. A la carte selections include grilled lobster with cheese chili sauce at 130,000 won, sauteed abalone with butter sauce at 31,000 won and seafood fried rice at 30,000 won. All prices exclude tax and service charge.

The Bistro located on the lobby floor was renovated under the direction of new chef Patrice Guilbert and transformed into a contemporary French restaurant. The new list of 50 menus includes meat and seafood supplied from Jeju Island and Andong in North Gyeongsang, known as one of the market centers of Korea. The a la carte menus are priced at 15,000 won to 52,000 won, lunch set at 38,000 won to 49,000 won and dinner set at 63,000 won. All prices are subject to tax.

Guests who wish to stay overnight may enjoy the “Carmen Mota’s Fuego Package.” It consists of a one-night stay in the Club Deluxe, Club Sweet or Club Family Sweet. As well as breakfast, the dinner show, giveaway presents and a Flamenco DVD with Carmen Mota’s autograph. The price starts at 629,900 won, including tax and services charge.

* Information is culled from the hotels.