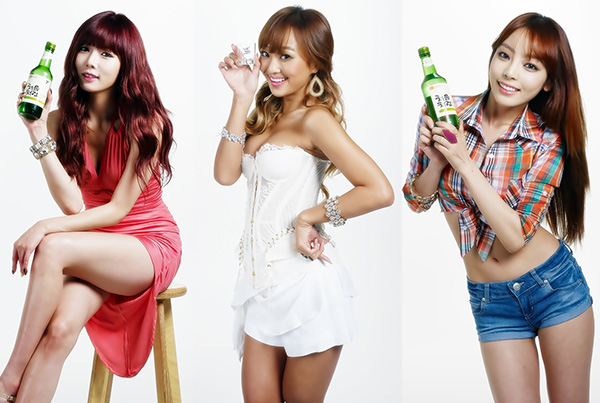 A week after Lotte Liquor decided not to renew its endorsement deal with singer Lee Hyo-ri, the company has recruited three young women of K-pop to become the new faces for its “Like the First Time” line of soju.

Lotte said yesterday that KARA’s Goo Ha-ra, Sistar’s Hyolyn and 4Minute’s Hyun-a have all signed with the brand and revealed a teaser image while promising a new campaign and advertisements starting next month.

Lotte said that the three front women of the leading girl groups were picked as they represent “sex appeal, style and cuteness.”

“It will be like a battle for the girls to see who can be the sexiest,” said a representative from Lotte. The three will represent the brand for six months.

The girls’ predecessor Lee had been the face of the brand for five years. She signed with the company eight times and was the longest surviving model.

During the time, more than 20 billion bottles of the popular Korean liquor were sold.

“There were good times, there were bad times, but it was fun all the while,” said Lee.