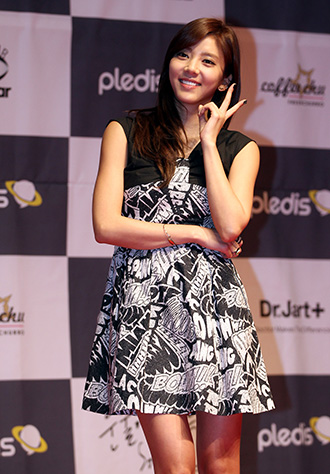 Son Dam-bi is currently on top of the Chinese music video charts. Her title track “Dripping Tears” from her fourth EP is No. 1 on Yinyuetai.com’s weekly chart.

The music video unveiled Nov. 12 came to reach the top spot on the Chinese Web site yesterday after exceeding two million views and was also the No. 1 song on the day.

Son’s agency Pledis Entertainment said it was proud of the singer’s popularity abroad. “We just want to thank the Chinese fans who have showed their support for Son Dam-bi, and we hope to make a visit there soon.”

Yinyuetai.com boasts more than three million visitors per day and specializes in ranking music from all over Asia and the West. Songs are ranked on the basis of views, recommendations and download counts.

Son is currently promoting her fourth EP by making appearances on various shows. On Monday, the 29-year-old appeared on the talk show “Mighty Heart” and revealed that actor Ahn Jae-wook had confessed he liked her. Although they worked together and were friends, she said she wasn’t interested.