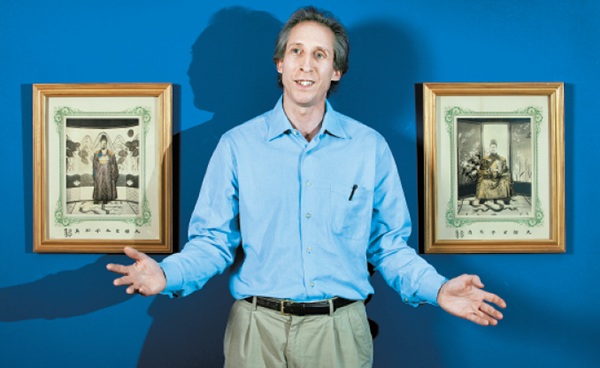 David Hogge, a curator of the Smithsonian, says photographs were used as diplomatic gifts and to promote a country’s image. By Park Sang-moon


David Hogge, head of archives at the Freer Gallery of Art and Arthur M. Sackler Gallery, says the Smithsonian Institution’s two galleries dedicated to Asian art have a wide range of photographs of imperial figures from Iran, China, Japan and elsewhere.

Hogge received his doctorate in art history at the University of Washington, specializing in the history of Asian art. He had planned and organized an exhibition called “Power Play: China’s Empress Dowager” and a conference on “Imperial Exposure: Early Photography and Royal Portraits Across Asia” at the Freer and Sackler galleries last year.

The Korea JoongAng Daily sat down with Hogge to talk about the meaning of royal photography and portraits during the colonial era.

Q. What do you think is the significance of the photos of Gojong and Sunjong that you brought to the exhibition?

A. To me, they represent the embrace of photography as diplomatic gift. This was established by Queen Victoria, who is most famous for having herself photographed with her husband and with her family to show a great deal of intimacy, which created a wonderful sense of identity and loyalty.

In Asia, there is a whole range of different responses to photography. Emperor Meiji [of Japan] hated being photographed, and there are only three to four photographs of him. The use of them became widespread - they were kept in a shrine, and put in schools for daily or annual worship.

Empress Dowager of China seemed to have taken photography as a private curiosity. She was interested to see what she looked like. Once the photos was taken, I don’t think she had any intention of distributing them. But because of diplomatic pressure, she started giving these as gifts. She gave one to Alice Roosevelt.

The Korean situation is very unique. Gojong saw the potential of photographic portraits as gifts to foreigners as a way of creating sympathy or equality with the foreigners. But it’s so much more complex in terms of domestic consumption. 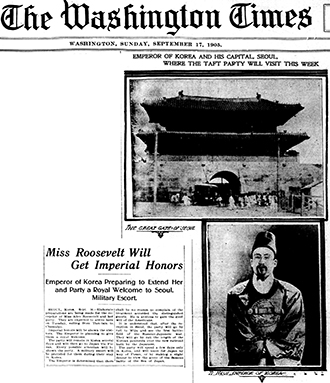 Article in The Washington Times reports on Alice Roosevelt’s 1905 trip to Korea.

While early photographs of Korea made by foreigners are useful data, many of them have inaccurate captions. What are the strengths and weaknesses of photographs as history?

The captions are not just wrong, but in some cases very demeaning, insulting and condescending. Because the missionaries were so strong in Korea, there’s a very explicit condemnation of Buddhism and Shamanism. Those kinds of sentiments are very evident.

Photography coincided with the high point of the colonial enterprise. Even America was part of that colonial strategy. It secretly agreed with Japan that if Japan didn’t touch the Philippines, it could have Korea. So photography was not just recording things for domestic consumption, but it really is almost like an inventory of the colonial acquisitions.

It was an extremely effective means of controlling the image [of countries]. And the Japanese were very good at it.

So overall, the view of Japan was very positive, because people looked at it and the photographs were beautiful - they showed Mount Fuji, cherry blossoms and geishas.

The Koreans just did not have that kind of control over their image. Who controls these images is extremely important.

The favorite photographs for tourists when they came to Korea were laborers, laundry women and people with big loads on their backs. The Chinese also had a very poor control over the images that represented them.

That kind of control - who controlled the images - was extremely important, and it still is.