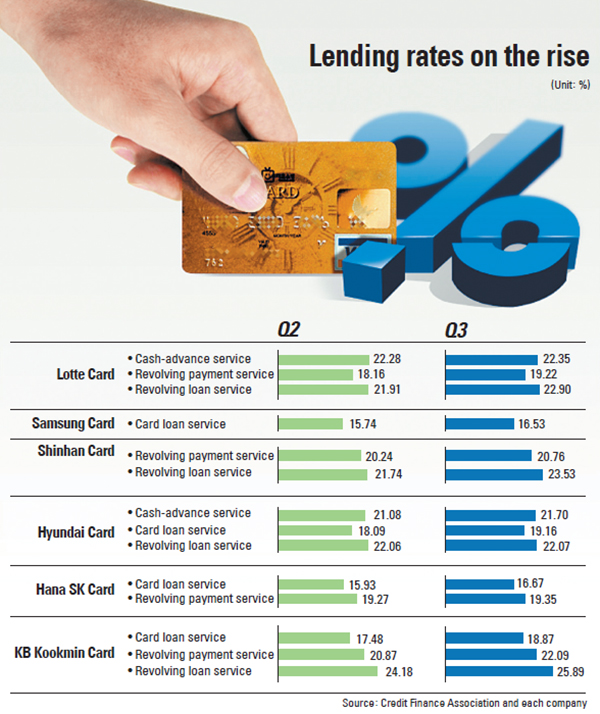 Despite pressure to the contrary from the Financial Supervisory Service, credit card companies have been raising their interest rates for revolving credit services, according to industry sources yesterday.

The move flies in the face of criticism from the public that the companies are imposing predatory interest rates on those already strapped for cash.

According to statistics by the Credit Finance Association, all credit card companies in the country except for Samsung Card have raised their rates for allowing customers the privilege of rolling their debt over to subsequent months until it is paid off.

Kookmin Card raised it’s rate by the highest margin of 1.7 percentage points to 25.89 percent in the third quarter from the previous three months, the data showed.

The system of revolving credit card debt is often used by low-income households and people with poor credit ratings to service other debts.

Pressed by financial authorities to lower their rates, some of the companies have publicly eliminated their commission charges for cash advances while quietly raising their lending rates for use of the revolving debt service, the association claims.

Credit card companies have announced that they have no option as their profits slide due to the lower transaction fees imposed on mom-and-pop stores and merchants at traditional outdoor markets, which dropped from 1.8 percent to 1.5 percent in September.

Financial Supervisory Service Gov. Kwon Hyouk-se said yesterday the watchdog will look into the issue, hinting that countermeasures may be in the pipeline.

“Now is not the right time for credit card companies to be bumping up their lending rates for [those struggling to meet their repayment obligations],” he said.