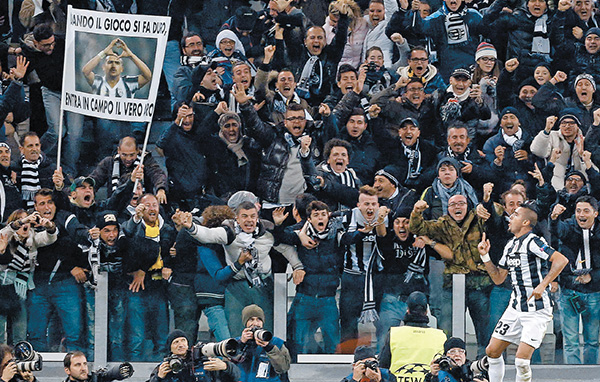 Juventus’ Arturo Vidal celebrates after scoring against Chelsea during their Champions League football match at the Juventus stadium in Turin. Juventus routed Chelsea 3-0, leaving Chelsea in danger of picking up the dubious honor of becoming the first titleholders to crash out in the first round. [REUTERS/YONHAP]


TURIN, Italy - Barcelona and Bayern Munich qualified for the Champions League last 16 on Tuesday but Chelsea were in danger of picking up the dubious honor of becoming the first titleholders to crash out in the first round after an emphatic 3-0 defeat to a dominant Juventus here.

Chelsea went into the clash one point ahead of the Bianconeri in Group E but were dominated throughout and found no answer to goals in either half from Fabio Quagliarella and Arturo Vidal.

The champions’ hopes of any kind of fightback were dashed when second-half substitute Sebastian Giovinco beat the onrushing Petr Cech in the first minute of injury time to secure a 3-0 win.

“It was a great team effort,” said assistant Juventus coach Angelo Alessio, whose side now sits second in the group behind Shakhtar Donetsk after the Ukrainians qualified by defeating Nordsjaelland.

“We were strong in defense but the whole team showed up with the will to put in a strong performance. It has given us a lot of confidence but we still feel there’s room for improvement.”

“Last season the Champions League was like a dream, now this is like, not a nightmare, just very disappointing,” said Chelsea keeper Cech.

He added: “We said before the game that we have our destiny in our hands, not any more. Now we need to do our bit, we need to win our last game and hope our fate is kind.

“Being realistic Juventus played very well and they need a point and Shakhtar are already through. It is a very sad moment.”

Barely six months after being crowned kings of Europe, Chelsea is facing the ignominy of dropping out of the competition before the lucrative last 16 knockout phase.

It comes amid a torrid spell for the English giants, who have now leaked 20 goals in their past nine games in all competitions, including two in a 2-1 defeat to West Bromwich Albion on Saturday.

Blues manager Roberto Di Matteo said: “It’s a big disappointment. Obviously a difficult evening for us, the team, the club. A lot of reflection.”

Chelsea must beat Nordsjaelland in their final match to qualify, but their last 16 destiny now depends on the result of the Shakhtar vs. Juve match in a fortnight.

Barcelona kept the wheels firmly on their pursuit of a fourth European crown, bouncing back from defeat at Celtic in their last run out to see off Spartak Moscow 3-0 in the Russian capital.

Lionel Messi was the hero of the night, scoring twice and setting up Dani Alves for the opener to maintain Barca’s control of Group G with 12 points.

Messi, who moved level with Ruud van Nistelrooy on 56 Champions League goals but behind Raul, the competition’s all time scorer with 71, was as unassuming as ever after the game.

“My aim was just to get the ball, create chances and that we win the game, that is what is important,” said the Argentine icon.

“We knew we couldn’t afford to make mistakes after what happened against Celtic and that we had to go out strongly even though it is difficult to play away in this competition.”

In Group F, Valencia took to the pitch against Bayern in the happy knowledge that they were through to the next round as a result of Lille’s earlier 2-0 win at BATE Borisov.

A 1-1 draw in Spain earned Bayern qualification from the group as well.

Midfielder Sofiane Feghouli had put Valencia ahead with time running out, but Bayern held their nerve as Germany midfielder Mueller netted the equalizer.