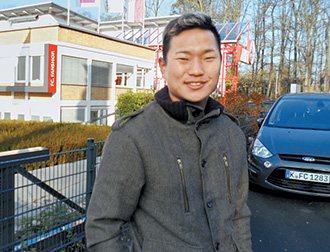 Jong Tae-se, of FC Koln, poses after an interview with Ilgan Sports in Koln, Germany on Tuesday. By Park Rin

The 28-year-old Japan-born football player, who frequently teared up when he was in his North Korean uniform and listening to the North Korean anthem on the pitch, shows little animosity toward the South. He even called it another possible home in an interview with the Ilgan Sports on Tuesday.

With an open mind, Jong said he has been deliberating a move to South Korea. In the interview held in this German city where he plays for Bundesliga club FC Koln, Jong said that he could possibly contribute to the unification of the two Koreas if he embarked upon a career with a South Korean football club.

“There has been an offer from the K-League,” said Jong, who was linked to a transfer rumor to the Suwon Bluewings.

He did not name which club or clubs made that offer, nor did he confirm moving to the South, saying he is still open to other options such as staying with his current club or returning to Japan.

But, he said, “If I get to play in South Korea, I want to assume the role of an ambassador of football.

“For a Choson [the Democratic People’s Republic of Korea’s name for their country] player to play in South Korea, the country of the same people, I wish it would push forward the unification [of the two Koreas].”

Born in Nagoya and attending primary and secondary school at the North-established schools in Japan, Jong has played for North Korea since 2006.

He led the offense of the North, scoring 15 goals in 28 games.

He also played for a J-League club Kawasaki Frontale between 2006 and 2010, where he shined with 47 goals in total.

He moved to the Bundesliga’s 2nd division club Vfl Bochum in 2010, and then to Koln this year.

With Koln, he has been benched during much of the 2012-13 season, losing out in a competition for the striker’s position.

South Korean papers began reporting a rumor that he may come to a K-League club for a deal amounting to 1.6 billion won ($1.47 million).

The reports were met with pleasant surprise by many South Korean football fans, who affectionately call him “Inmin Rooney,” or the People’s Rooney, comparing his goal-getting ability to that of the Manchester United’s striker Wayne Rooney.

But some football observers are skeptical of the rumored deal, saying it would be too much money for a failed Bundesliga player.

Jong said he is not a failure. “In a track and field event for instance, the loser is not the runner who crosses the finish line last, but a runner who cannot even stand on the starting line,” he said.