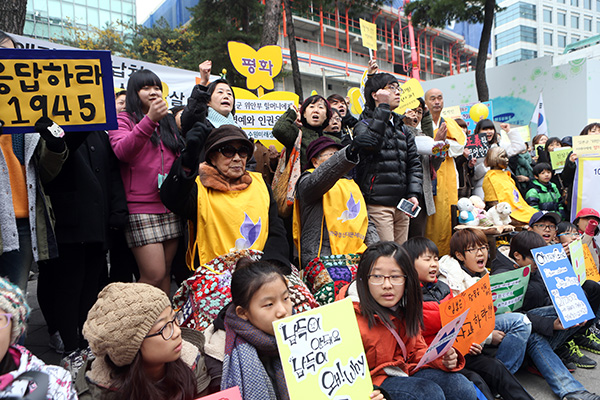 Elderly women who were forced into sexual slavery by the imperial Japanese military during World War II, along with their supporters, demand that the Japanese government make an apology for its past atrocities in front of the Japanese Embassy in Seoul yesterday. [YONHAP]


Japan’s main opposition Liberal Democratic Party (LDP) yesterday introduced a draft of its far-right policy pledges ahead of the Dec. 16 parliamentary election that includes promises to upgrade the status of Takeshima Day and intensify arguments that claim innocence for its wartime atrocities.

Concerns are now growing in Korea that the conservative party’s pledges, if realized, will trigger strong protests among Koreans and will deepen diplomatic conflict over issues of territory and history. The pledges announced by the LDP include matters related to foreign affairs, including how it will deal with issues on Dokdo and the so-called “comfort women,” or a reference to wartime sex slaves.

The LDP is headed by the conservative politician Shinzo Abe, who is competing to become Japan’s next prime minister, succeeding Prime Minister Yoshihiko Noda from the ruling Democratic Party of Japan (DPJ).

The LDP said that it will come up with “precise arguments and counterevidence” to address the comfort women issue with Korea, which has been requesting an official apology and compensation.

The pledge is seen as Japan’s efforts to argue and persuade the international society that there was no coercion in pulling Korean women into sexual slavery. Historians say up to 200,000 women, mostly Koreans, were forced into sexual slavery at frontline Japanese military brothels during Japan’s colonial rule from 1910 to 1945.

Also the former sex slaves have long been calling for the Japanese government to make an official apology as well as provide compensation.

Tokyo, however, has throughout claimed that issues regarding its colonial rule were settled in a 1965 package compensation deal under which Korea and Japan normalized their relations. 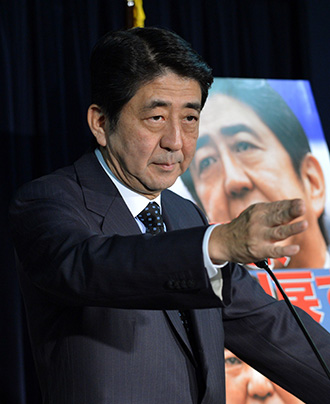 In its pledge, the LDP also said it will upgrade the status of Takeshima (Japan’s moniker for Dokdo, Korea’s easternmost islets) Day by having the government host the celebratory event instead of the prefecture.

The move to underline the importance of Takeshima Day has been sought after by right-wing politicians in Japan, including Abe.

The LDP also decided to establish a separate organization in charge of promoting historical and academic research on territorial issues including Dokdo and Senkaku Islands (a group of islands in the East China Sea that are claimed both by Japan and China).

The plan is seen as a move to prepare logical evidence should the Japanese government raise the respective territorial issue to the International Court of Justice.

The conservative party also said it will increase spending on maritime defense and encourage the country to reinterpret its Constitution to allow it the right to exercise “collective self-defense,” which allows a third country to use armed forces directly against a random country that is attacking its ally even if the third country hasn’t been attacked.