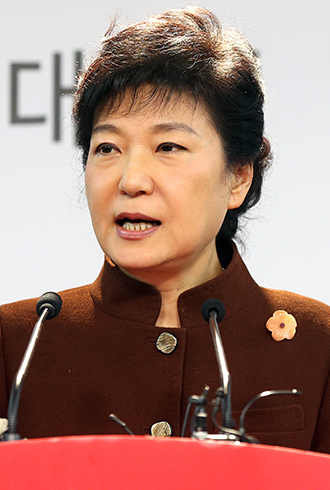 In a press conference hosted at the ruling party’s headquarters, Park addressed one of the most popular issues of the country - education.

She promised to overhaul the public education system to dramatically cut parents’ burdens on private tutoring.

To this end, she promised to push forward a special law to ban schools from conducting exams that include any questions beyond the curriculum.

Park also promised to cut college tuition by 50 percent by 2014 and substantially lower the interest rates of tuition loans.

Free after-school programs and childcare systems at public schools until 10 p.m. were proposed for elementary school students to lessen the burden of working parents.

She also promised to improve sports education at public schools.

The announcement of her education reform pledges came hours before the TV debate between Moon Jae-in of the Democratic United Party and independent contender Ahn Cheol-soo.

As her two liberal contenders had a television appearance before the public, Park’s campaign demanded equal air time.

She will have a solo appearance in a TV debate with a group of panelists in a town hall-type meeting, and the Saenuri Party is consulting with KBS, the host of the session, for air time.

The Saenuri Party originally planned to have the debate tomorrow night, but the low audience rating among young voters on Friday night became an issue.