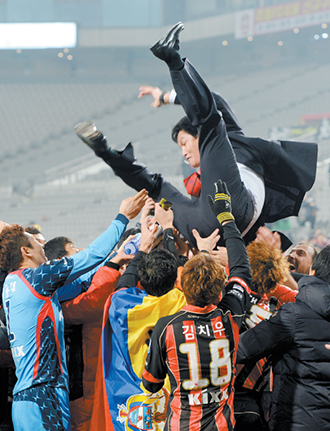 Despite FC Seoul’s unstoppable run throughout the season, the title of best in the K-League, earned after a 1-0 victory over Jeju United Wednesday night, is too good to be true for many in the club.

Han Woong-soo, an FC Seoul director, said the club’s officials weren’t sure the 2010 champions’ would return to the top after they handed over the helm to Choi Yong-soo, 39, the franchise star-turned-coach, before the season.

“We expected a third-place finish at best, so it is amazing,” Han said.

FC Seoul locked down the league title with three more games left, thanks to Jung Jo-gook’s 36th-minute winner in the home match. Their biggest rival Jeonbuk Motors, the defending champions, were held to a 3-3 draw by Ulsan Hyundai on Wednesday, falling 12 points behind Seoul.

There is no playoff this year due to the newly introduced split system, in which the league decides the winner and the relegation-bound loser based on the results of the 14-game, two-group second-half of the season.

The winning prize is 500 million won ($460,829), plus a berth in next year’s Asian Football Confederation Champions League, its third berth in the continental event. FC Seoul was knocked out in the quarterfinal of the AFC Champions League in 2011 and 2009.

It is Seoul’s fifth overall title including the three titles earned by their predecessors - the Anyang LG Cheetahs in 2000 and the Lucky-Gold Star Hwangso in 1990 and 1985.

Choi won three of them, once as an assistant coach in 2010 and once for the Cheetahs in 2000. Ending his stellar career as a professional football player, most of it with the franchise in 2006, he immediately embarked on a coaching career with Seoul, serving Turkish coach Senol Gunes between 2007 and 2009 and Portuguese coach Nelo Vingada in 2010.

Choi seized a chance for promotion when his predecessor Hwangbo Kwan fell out of favor early last year after the team fell to as low as 15th place in the 16-team league.

Hwangbo quit in April 2011 and Choi took charge as acting head coach and led the team to a third-place finish in the regular season. Choi was named the head coach ahead of the 2012 season and made an impressive run over the teams considered favorites to win such as the Motors, Suwon Bluewings and Seongnam Chunma. Seoul hoarded 90 points in 41 matches so far, from 27 victories and nine draws.

“I expected it would not be an easy season, but we put quite an end to it and I am so happy,” Choi told a post-game media conference. “Doing a winning ceremony in front of home fans, I think, it must have felt amazing for our players. They deserve a win.”

Choi coined “Mugonghae” as his team’s motto this season. The word is an abbreviation of what is roughly translated as “attack only,” which reflects Choi’s football style as a striker, but it also means “pollution-free,” an expression of his resolve for fair play. His players have lived up to it well. During 41 matches of the year through Wednesday, Seoul had 557 fouls and received 61 yellow cards, the lowest for the season among the K-League clubs in both categories.

Despite sealing the title, some of the Seoul players will continue sweating it out in the remaining three matches for individual records, including the “Demolition” duo, referring to two foreign players, Dejan Damjanovic and Molina.

Montenegrin striker Damjanovic has scored 30 goals of the season, four ahead of Jeonbuk Motors striker Lee Dong-gook, who added two goals on Wednesday. Damjanovic already renewed the K-League record of the most goal per season, getting past the previous record, 28, held by Kim Do-hoon of Seongnam Chunma in 2003.

Colombian midfielder Mauricio Uribe, or Molina as he is known in Korea, is leading in 18 assists, six ahead of the Motors’ Brazilian midfielder Enio Oliveira Junior.

Uribe, who also scored 17 goals this season, is seeking to break the league’s record in combined attacking points, (goal and assists together), 41, which is also held by Kim in 2003.

As a team, Seoul will also continue its quest for the title as the most successful defending club. It allowed 36 goals for the season, the lowest goals which only Incheon United matched.