U-19 win was all mental, coach says

U-19 win was all mental, coach says 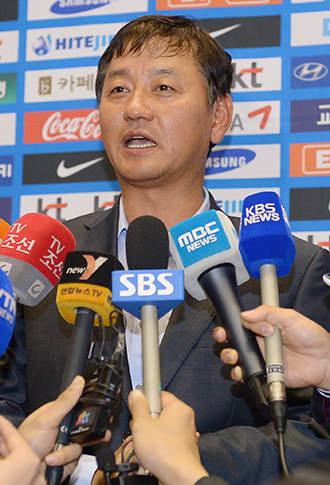 Lee Kwang-jong, the coach of Korea’s U-19 football team, said in an interview with the Ilgan Sports yesterday that mental strength, not technical prowess, was the biggest factor in his team winning a prestigious Asian title.

The team won the Asian Football Confederation U-19 Championship, the first such title for Korea in eight years, edging Iraq 4-1 in the penalty shootout in Saturday’s final. Striker Moon Chang-jin scored a dramatic equalizer in stoppage time, forcing an extension, which ended scoreless after 1-1 during the 90-minute game.

“To be frank, we are not at a world-class level in technique, but football is not only about technique,” the 48-year-old coach said. “If we excel mentally, we can overcome the disparity.”

This is the 12th U-19 title for Korea, the most successful country in the region, but Lee said it was not all easy. He said the level of football at the youth level has improved, in particular naming Iraq, Iran, the United Arab Emirates, Syria and Australia as visibly better teams.

The expectation among home fans was also low, as there were no star players on the squad, unlike previous Korean youth teams. Many Koreans playing overseas such as Park Chu-young of Celta Vigo and Ki Sung-yueng of Swansea City had led the youth team previously.

Lee said he turned it into a motivation for the players.

“There were less professional players (than the previous teams) and many of our players had not received media spotlight,” he said. “I let them know it, and said that we could show them what we’ve got and that brought them together.

“I tried to draw out what was in their hearts and they punched above their weight.”

Lee, a former Suwon Bluewings player, has coached only the youth teams since 2000, turning down offers to coach several professional football clubs.