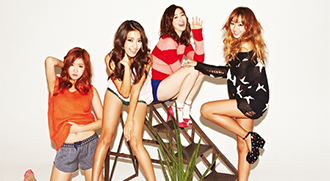 Sistar was voted “Women of the Year” by the men’s quarterly GQ Korea. According to the magazine yesterday, the girl group was picked “because there were not many other options.”

The upcoming issue contains an interview with the sexy quartet, as well as articles on actor Ha Jung-woo, who was named “Man of the Year,” and Kim Ki-duk, “Film Director of the Year.”

Also mentioned in the issue are Psy, Seo In-guk and Ki Sung-yong.

Meanwhile, Sistar’s lead vocalist Hyolyn has been at the center of attention lately. Two days ago, she was picked to represent Lotte Liquor’s line of soju “Like the First Time.” She will be the face of the brand along with 4Minute’s Hyun-a and KARA’s Ha-ra for the next six months.

As well as being recognized for her charm, she was acknowledged by her peers as the best vocalist in K-pop.

A survey of idol group singers revealed on MBC’s “Weekly Idol” showed Hyolyn at the top of the list.