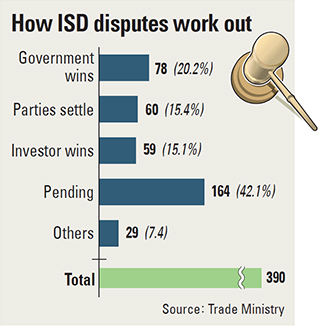 The investor-state dispute settlement (ISD) issue is once again in the spot light after the Dallas-based Lone Star filed a request for arbitration against the Korean government over the sale of Korea Exchange Bank.

The ISD clause in the free trade agreement between Korea and the U.S. that went into effect in March has been controversial for a while.

The ISD clause allows foreign companies and investors to file for arbitration internationally in the event of a dispute with a foreign government. It is seen as a form of insurance against governments that are protectionist or anti-foreign investor.

The left-leaning Democratic United Party opposes the ISD clause in the agreement and calls it one of the agreement’s 10 “toxic clauses.” It argues that it will harm Korea and give foreign investors an end-run around the government’s regulations.

The opposition party insists the ISD clause is specifically designed to protect the interests of foreign investors to the detriment of Korea.

The government and ruling Saenuri party maintain the ISD clause has the positive effect of attracting more foreign investment to the country.

“The ISD clause is a safeguard for both Korean investors abroad and foreign investors willing to make investments in this country,” said Trade Minister Bark Tae-ho in an earlier interview with the Korea JoongAng Daily.

“The ISD clause is a guarantee certificate for larger foreign investments that will eventually lead to the creation of new jobs,” said Han Duk-soo, chairman of the Korea International Trade Association.

Han was one of the key members that designed the bilateral trade agreement with the U.S. under the current administration. Earlier, he was Korean ambassador to the United States.

Korea joined the International Centre for Settlement of Investment Disputes in 1967 and has included ISD clauses in its BITs since 1970.

Of the total 85 BITs that Korea has signed with other countries, 81 agreements have ISD clauses. Of its eight free trade agreements, seven have the clause.

There have been 390 international ISD disputes as of 2010, according to the trade ministry. Governments won in 78 cases, while investors won in 59 cases.

The opposition continues to decry the ISD clause in the Korea-U.S. FTA, and the Lee administration and ruling party partly agreed to consider a renegotiation with the U.S. counterpart not long after the free trade agreement went into effect. But there have been no renegotiations.

During last month’s National Assembly audit, the Korean ambassador to the U.S. was questioned on why the government wasn’t making any progress.

“The government agreed on a renegotiation until June 15, three months after the free trade agreement with the U.S. went into effect, and yet there hasn’t been anything said about the issue since,” said Jung Cheong-rae, a Democratic United Party lawmaker at an audit hearing that was held at the Korean embassy in Washington in mid-October.

“The U.S. said it will discuss the issue if we [the Korean government] officially propose it, but we haven’t finished all the processes including discussions at the National Assembly,” Choi Young-jin, Korean ambassador to the U.S., responded.

The government released a statement last month saying a task force of experts was launched after the free trade agreement went into effect and that the task force has been reviewing the clause.