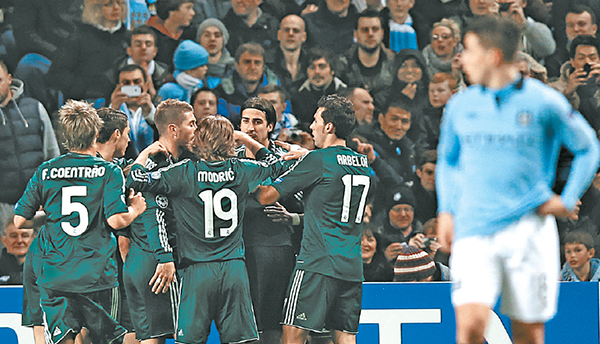 Players of Real Madrid celebrate after scoring during the UEFA Champions League Group D match between Manchester City and Real Madrid at Etihad Stadium in Manchester, Britain, Wednesday. The match ended with a 1-1 draw, leading Madrid to the last 16 and ushering City to the exit. [XINHUA/YONHAP]


MANCHESTER, England - Real Madrid called on the experience of nearly 60 years of European competition which has brought them a record nine European Cups as they ushered Manchester City through the exit door of the Champions League on Wednesday.

Madrid boss Jose Mourinho, who was celebrating his 100th Champions League match as a coach, saw his team draw 1-1 to secure their place in the last 16 from Group D and leave his old Italian adversary Roberto Mancini ruing what might have been for his Champions League novices.

The only group to feature four national champions will end with Borussia Dortmund and Real advancing, and Ajax Amsterdam and City going either into the Europa League or out completely.

City were eliminated at the group stage for a second successive season and the gulf in class was obvious from the start as Real tore into a three-man home defense that struggled to cope with Cristiano Ronaldo’s runs and Angel Di Maria’s blistering pace on the right flank.

Real could have scored six times in the first 45 minutes against a high-value side playing in only their 11th Champions League match since their debut last season, but produced just one goal when Karim Benzema lost his defender Maicon, found himself unmarked and in space 2 meters (6.5 feet) out and fired home.

City were run ragged in the first half but improved in the second after Mancini switched from a 3-5-2 formation to a more orthodox 4-4-2 with Javi Garcia creating some momentum which wingbacks Alekxandar Kolarov and Maicon had failed to do in the one-sided opening period.

They also looked livelier when Carlos Tevez joined the fray with half an hour to play and deservedly got a goal back when former Atletico Madrid striker Sergio Aguero sent his penalty past Casillas with 17 minutes left after Alvaro Arbeloa had been sent off for a foul on the Argentine.

Aguero should have done better when he fired straight at Casillas from point-blank range in the 65th minute. That summed up City’s night: they were good in patches but just not good enough to get the better of Real.

Mancini, asked why he had changed formation, said: “I thought with three at the back Kolarov and Maicon would be good for us but instead we conceded a goal and left them a lot of space to counter-attack.”

City had to win this match and their remaining game in Dortmund to have any chance of qualifying but that was always a long shot and never really looked likely once Real took an early grip.

Real were solid at the back, even after the sending-off and Mourinho was pleased they had come through the game so well.