iPhone 5 may wing its way to Korea on Dec. 7

iPhone 5 may wing its way to Korea on Dec. 7 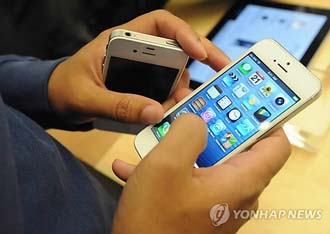 Rumors are swirling that it could be launched on this date with super-fast long-term evolution connectivity through two leading mobile service providers, SK Telecom and KT. If so, this would mean local consumers will have waited almost three months since it was unveiled on Sept. 12 in San Francisco.

Given that pre-orders for any Apple gadget begin a week before offline sales, the iPhone 5 may become available for online reservations on Nov. 30.

Spokesmen with both carriers declined to confirm the dates.

Korea has an estimated 1.5 million to 2 million users who are waiting to replace their current handsets with an iPhone 5, whose display size has grown from 3.8 inches to 4.

KT alone has 1.5 million subscribers to its iPhone 3GS and iPhone 4, the first two generations of the iPhone.

But many consumers have been expressing frustration at the longer-than-expected delay to the roll out, especially given the high level of wrong information circulating about when it will hit local shelves.

The delay is largely due to tight supply, and Apple Korea’s repeated mistakes in obtaining the government’s approval for the mobile device’s frequency band use here.

This has led to the iPhone 5 picking up the local sobriquet of the “next-month phone” in Korea, where a significant share of traditional Apple fans are believed to have migrated over to its rival, the Samsung Galaxy S3 or Note 2 in the past three months.

Meanwhile, LG Electronics said yesterday it is in talks with Google to unveil the Nexus 4 smartphone in Korea. Powered by Jelly Bean, or Android’s 4.2 OS, the 4.7-inch smartphone has been hugely popular in the United States and Europe largely due to its low cost - it has a starting price of $299 - and high capacity.