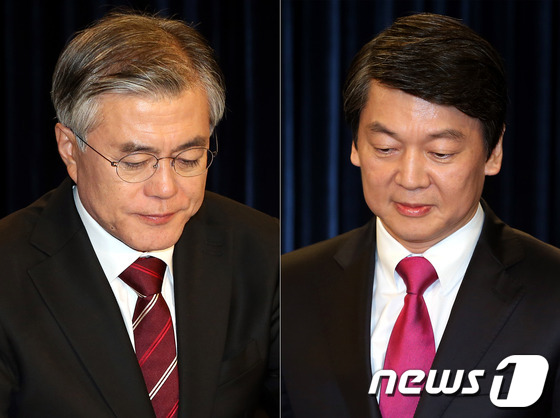 In the hours leading up to the live, televised debate of the two main liberal presidential candidates, their closest aides went through several rounds of negotiations over the method of choosing which will run and which will stand down.

No decision was made by press time last night.

Democratic United Party candidate Moon Jae-in and independent Ahn Cheol-soo were scheduled to meet tonight at the Kim Koo Museum and Library in central Seoul for a debate starting at 11:15 p.m. to be carried live by four local broadcasters. Political commentator Chung Kwan-yong was to be the host, and there was no audience. The candidates were to discuss politics, the economy, social welfare, and foreign and national defense issues.

But throughout the day, the candidates’ aides struggled through several rounds of talks on the method to choose the united liberal candidate to run against the ruling party’s Park Geun-hye.

Ahn told reporters yesterday that if the negotiators failed to reach a decision before the candidacy registration period, which falls on Sunday and Monday, he will have a one-on-one meeting with Moon.

“I think it would be right to meet with Moon in person and resolve the problem if the negotiation isn’t going well,” he said. “I will do my best to reach a decision in the negotiation by Monday.”

In the talks yesterday, both sides had agreed that the winner of a public opinion poll would be the unified candidate. But they couldn’t agree to the questions to be asked in the poll.

Moon’s camp wanted a single question: “Which candidate is more qualified as the single liberal candidate?”

Moon’s camp didn’t like Ahn’s questions. They argued that some Saenuri Party supporters like Ahn so he would pick up votes in that question that Moon would not. It said if Ahn wanted those questions, Saenuri Party supporters should be excluded from the poll. The negotiations between the liberal candidates have gone on longer than the 2002 negotiations between Roh Moo-hyun and independent Chung Mong-joon.

Those negotiations began 21 days ahead of the candidacy registration period.

Although they had trouble in deciding the method to pick the single candidate, they finally reached a decision and held a debate five days ahead of the deadline. Roh won an opinion poll two days ahead of registration day, which was Nov. 27.

During the 2002 negotiation, the two liberal candidates also sparred over the poll’s questions. In the end, they mixed two suggestions into one question: “Which is the more qualified candidate to beat the Grand National Party rival?”

Last night’s debate was originally scheduled for 10 p.m. and was supposed to be aired by the Korean Broadcasting System alone. But the network changed the time to 11:15 p.m. and three other broadcasters decided to show it live.

“All the fine phrases, such as ‘coalition of values,’ have all disappeared,” Ahn Hyoung-hwan, a Saenuri lawmaker said at a briefing. “There’s only a dirty survival game left.”