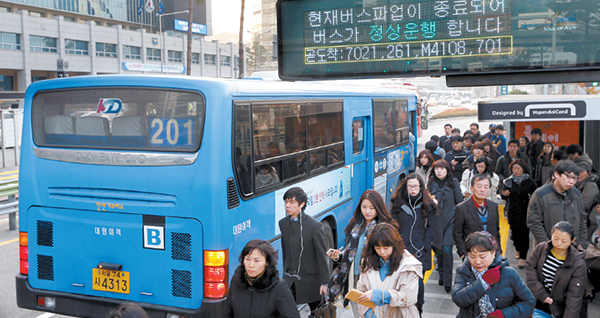 Commuters get off a bus yesterday morning at Seoul Station following a short-lived strike that lasted about two hours around dawn. By Kang Jung-hyun


A nationwide bus strike was called off after two hours yesterday morning, preventing unprecedented commuter chaos during rush hour after legislators agreed to delay passage of a controversial bill.

“Although we began the strike, the government made an earnest appeal and the prime minister asked the legislature to defer the vote on the taxi bill,” the National Association of Bus Companies said in a statement. “We also can no longer ignore the enormous public inconvenience. From a broad point of view, we resumed operations, but we will go on strike again if the legislature approves the bill.”

Bus operations in Seoul, Incheon and Gyeonggi were normalized by 7 a.m. in time for the morning rush hour.

Later in the morning, National Assembly Speaker Kang Chang-hee met with the floor leaders of the ruling Saenuri and opposition Democratic United parties and talked about the controversial bill to revise the Act on the Support and Promotion of Utilization of Mass Transit System. The bill is intended to recognize taxis as public transportation, creating legal grounds to provide them state subsidies and other benefits. It was supposed to be passed in a plenary session as early as yesterday.

The bus companies believe they will have to share subsidies with the taxi companies and receive less. They believe the legislature is playing politics before the presidential election because the bus industry, with about 120,000 workers, is dwarfed by the taxi cab industry, which employs about 300,000. 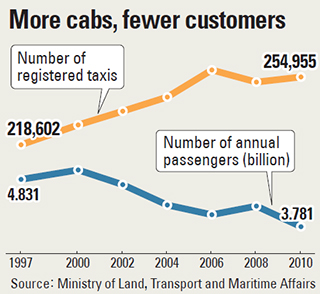 According to the Saenuri Party and the DUP, the legislature’s delay on the vote is a temporary move and it will still vote on the bill next month unless the government comes up with an alternative.

“We will urge the government to come up with a better subsidy measure to satisfy both the bus and taxi industries,” the ruling and opposition parties said in a statement released yesterday afternoon.

“If the government fails to present a convincing measure, we will approve the current taxi bill simultaneously with the 2013 budget.”

The deadline to approve the budget bill is Dec. 2, and the two parties said they will do their best to meet the target. The bus association said yesterday it appreciated the lawmakers’ decision to defer the bill. It also asked the ruling and opposition parties to gather the opinions of the government, the bus industry, transportation experts and the public to create a new subsidy plan for the taxi industry.

The central and local governments spend about 1.4 trillion won ($1.29 billion) annually in subsidies to bus companies nationwide. In six cities, including Seoul, bus companies were reimbursed 100 percent of the losses incurred from providing transfer discounts.

The legislature wants to recognize taxis as public transportation and provide similar benefits to them. The bus industry worries it will have to share the budget earmarked for subsidies with the cabbies.

The taxi industry is receiving about 760 billion won annually in fuel subsidies. But the perennial problems of an oversupply of cabs and low fares remain unresolved and politicians revisit the issue ahead of most elections.

After the ruling and opposition parties handed off the problem to the government yesterday, the Ministry of Land, Transportation and Maritime Affairs said it will push forward a comprehensive plan to normalize the business structure of the taxi industry.

According to the ministry, an excessive number of cabs on the roads and low fares are the fundamental issues. The ministry said it will conduct a nationwide survey to assess the ideal number of taxis and gradually lower the number over the next five years.

Since massive layoffs in the aftermath of the Asian economic crisis of the late 1990s, the number of Korean cab drivers has continued to rise, while the number of passengers has fallen. In 1997, 218,602 cabs were on the streets transporting more than 4.83 billion passengers that year, according to the Transportation Ministry.

With such an oversupply, a taxi driver earns about 19 million won annually, despite 12-hour workdays. The average annual salary of a bus driver is about 35 million won.

Of the taxis operating around the nation, 65 percent of them are privately owned by drivers, not taxi companies. The excessive number of privately owned cabs is seen as the main cause of the oversupply, and the government said the number should be cut by at least 50,000.

To retire the license for an owner-operator taxi, the central and local governments together offer about 13 million won in compensation, but the amount is too small to persuade drivers to slam the door on the business. As of now, a privately owned taxi license is worth about 65 million won in resale.

The government also decided to substantially increase fares over the next five years. As of now, taxi fares are adjusted every three years by local governments. The Seoul Metropolitan Government recently planned to increase the base fare from 2,400 won to 3,200 won, but the plan was delayed because the central government was concerned about rising prices.

The taxi industry staged a strike in June to pressure the government and the politicians to start solving some problems. With the presidential election drawing nearer, the ruling and opposition parties moved speedily last week to assuage the 300,000 taxi drivers, but the resistance of the bus industry and the government put the brakes on the measure.