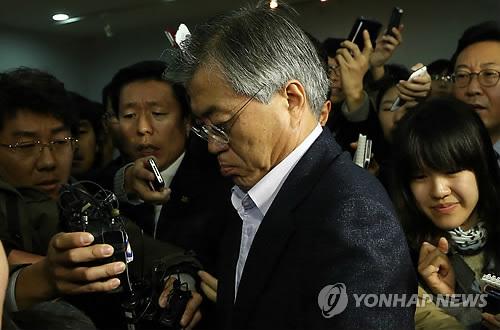 South Korea's two liberal presidential candidates met on Thursday to seek a breakthrough in setting the rules on selecting a single candidate to take on their conservative rival Park Geun-hye, but the talks ended without progress, camp officials said.

Moon Jae-in of the main opposition Democratic United Party (DUP) and independent candidate Ahn Cheol-soo have been in talks in forming an alliance before the registration deadline on Nov. 26, but their negotiators have failed to hammer out differences over the way how to conduct the nationwide surveys.


After the two agreed to meet in person to clinch the matter in a televised debate on Wednesday, they held a closed-door meeting in Seoul earlier in the day.

The much-anticipated meeting, however, ended with no progress made, sparking worries over the merger process.

In a briefing, Moon's spokesman Park Kwang-won said there was "no progress," while Ahn's spokesman Yoo Min-young said the two could not "move even a step closer to each other."

Moon said he will continue to find a way out of the deadlock, without going into details.

"We're stuck while time runs out," Moon told a pack of reporters when he showed up at a photo exhibition after the meeting. "(We) will have to spare no efforts in the remaining time."

It was not immediately known whether the two will meet again later.

With little time to hold primaries or other competitions, the respective camps earlier agreed to hold nationwide surveys, but the devil lies in the details of the questionnaires.

During the 90-minute meeting, Moon proposed a nationwide survey that asks who is the better candidate to represent the liberal camp, while Ahn stuck to a hypothetical two-way race with conservative rival Park, according to officials.

The tension comes as the two showed a competitive edge over the other in public surveys depending on the question given to respondents.

According to a poll jointly conducted by broadcaster SBS and pollster TNS on Nov. 17-18, which asked who is more suitable to become the liberal representative, Moon garnered 51.9 percent, followed by Ahn with 38.6 percent.

In another poll, conducted by broadcaster MBC and Hankook Research on Nov. 19, which supposed a two-way race with the ruling party candidate, both won against the 60-year-old Park, with Ahn drawing about 3 more percentage points than Moon.

Campaigns for the December 19 polls have been dominated by discussions about who will face the Saenuri Party's front-runner, the daughter of late President Park Chung-hee, who is popular among conservatives. 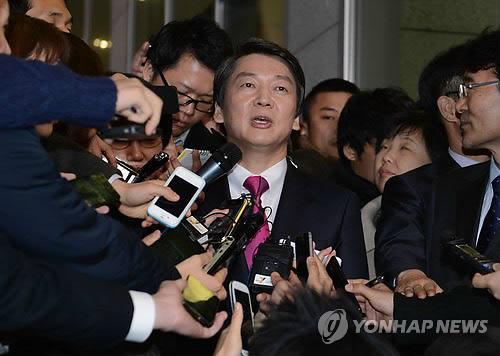 With neither Moon nor Ahn ready to drop out of the race to support the other, former merger negotiations have become bumpy and Ahn once suspended the talks, accusing Moon and his party of manipulating the process. It prompted the resignation of the DUP's chairman and senior party officials en masse on Sunday.

If the two men fail to reach an agreement on a merger and end up running separately, political analysts say they will split the liberal vote and effectively hand the presidency to Park.

During the TV debate, Moon, the former chief of staff to late President Roh Moo-hyun, said that he is the better candidate because he has a solid party base and political experience necessary to take the top office.
Ahn, the software mogul-turned-politician, argued he is more competitive to face off against Park and his lack of political experience will make him pick the best people for his Cabinet without political consideration.

It is not the first time for the 50-year-old Ahn, known as a brainy ascetic, to engage in a campaign merger process.

When Ahn was reported to be a candidate for the Seoul mayoralty in last year's by-election, he met with then-independent candidate Park Won-soon and decided to throw his support behind the lawyer-turned-activist. Park won the race, which was seen as a demonstration of Ahn's political influence.
(Yonhap)