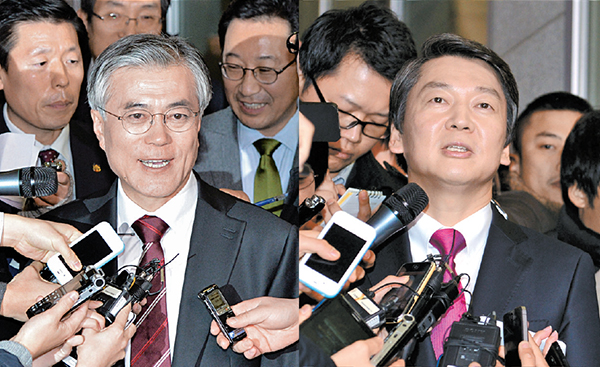 
The two liberal candidates battling it out to decide which should drop out of the race met each other for a debate Wednesday night, and the consensus was that the Democratic United Party’s Moon Jae-in gave the stronger performance.

Yesterday morning, they came face to face once again in an undisclosed location to attempt a breakthrough in stalemated talks on how to choose which candidate will run - and which will stand down. Apparently, independent Ahn Cheol-soo was stronger in the meeting, refusing to back down on his prior position.

“I don’t have anything more to say to you,” Moon told reporters after yesterday morning’s negotiations. “We don’t have much time. I feel I’m stuck.”

The men’s top aides also met for talks yesterday, which were equally fruitless.

“There was no progress in the bilateral talks between the two candidates,” spokesmen from the two camps said at a different briefing but in a joint statement. “We couldn’t narrow down differences at all.”

To merge their presidential bids to better fight the ruling Saenuri Party candidate Park Geun-hye, Moon and Ahn have basically accepted the idea of a public opinion poll deciding the contest. But they disagree on the questions that should be asked in the poll.

Moon’s camp wants a single question: “Which candidate is more qualified as the single liberal candidate?”

As for Wednesday’s debate, the JoongAng Ilbo interviewed a number of analysts and political commentators. Many said Moon won in general terms.

But in terms of election pledges, they both were ambiguous and there were some disagreements over issues such as economic policy and North Korea.

The 100-minute live debate asked the candidates about four subjects - politics, the economy, social welfare and national defense issues, including North Korean affairs. There was a host who rarely interrupted and no audience or reporters watching. The candidates were given 20 extra minutes to talk about any subject.

According to a poll by the private survey group Realmeter, the approval rating of Moon in a two-way race rose by 1.6 points to 44.2 percent following the debate, while Ahn’s dropped by 2.6 points to 36.4 percent.

“Moon was superior to Ahn,” said Ga Sang-jun, a political science professor at Dankook University. “Moon appeared to be intelligent on overall policies while Ahn was just concentrating on the materials he prepared. Ahn was also ambiguous in responding to some questions.”

At the beginning of the debate, Moon frequently tried to make eye contact with Ahn, who kept consulting prepared remarks.

“Moon seemed to be more natural in talking and debating,” said Yoon Jong-bin, a politics professor at Myongji University. “Moon spoke like he was conversing, but Ahn did a monologue.”

Analysts said the two didn’t fully discuss specific policies or political reforms because at the start Moon confronted Ahn about why his camp was dragging out the merger negotiation.

“They talked about their candidacies too much,” Yoon said. “They rarely mentioned overhauling the current power structure, local governments’ autonomy or political reform.”

“It was impressive that Moon attacked Ahn about his ambiguousness over the idea of reducing the number of lawmakers,” said Yoon Hee-woong, head of the Korea Society Opinion Institute. “But neither spoke practically about politics.”

“Ahn was more accurate in understanding the cause of the current economic crisis,” said Kim Soo-wook, a business administration professor at Seoul National University.

“Ahn said it’s because the financial sector has developed so much that it controls the real economy. But Moon just said growth-oriented development reached its limit, which was a vague theory.”

Kim Kyung-hwan, an economics professor at Sogang University, said, “I agree with Ahn’s opinion to separate the two roles of the Financial Supervisory Service: supervision and policy making. Moon’s opinion was not that good.”

Discussing social welfare, the two candidates mostly focused on Moon’s pledge to reform health insurance. Moon has promised to fix the maximum payment for medical treatments at 1 million won ($920) annually per person, so the government pays anything above.

“Moon prepared a lot about its specifics and how to raise the state budget for it,” said Hong Baek-ui, a social welfare professor at Seoul National University. “However, I didn’t understand what Ahn was talking about.”

Analysts said the candidates differed on national defense issues, especially North Korean affairs, raising concerns that even if they succeed in unifying their candidacies, there will be further disagreements.

“Moon said that he wants to resume inter-Korean talks immediately and even a summit,” said Chon Hyun-joon, a senior fellow researcher at the Korea Institute for National Unification. “But Ahn was more cautious, saying he wants Pyongyang to ensure the safety of tourists at the Mount Kumgang resort before holding a summit.”

Yang Moon-soo, a professor at the University of North Korean Studies, said, “When Moon said he wanted to resume Mount Kumgang tourism, it was similar to the stance of the Roh administration. However, Ahn just repeated principles in dealing with North Korean affairs.”