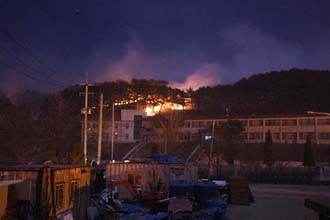 A memorial service, a naval firing drill and other commemorative events are to take place to commemorate the deaths of two soldiers in the North’s artillery bombardment of Yeonpyeong Island in the Yellow Sea on Nov. 23, 2010. The attack, which was the first launched by the North against civilians in the South since the 1950-53 Korean War ended in a truce, killed two soldiers and two civilians.

“The commemoration of the so-called victorious battle on Yeonpyeong Island will lead to the second Yeonpyeong Island disaster as long as the [North] Korean People’s Army is standing firm guard,” the North’s Korean Central News Agency (KCNA) reported in an English-language dispatch, quoting a spokesman of the army’s southwestern front command. “It is the steadfast will of the service personnel not to miss the opportunity to do so if the warmongers perpetrate another provocation.”

The KCNA report also accused Seoul of holding the commemoration events and “painting” the Yeonpyeong incident as a “victorious battle” in a scenario to “spark off a new war in the (Yellow Sea border) area.”

“The commemoration projected by them, trumpeting about victorious battle, would only harden the resolution of the service personnel of the southwestern front command to retaliate against them,” KCNA noted.