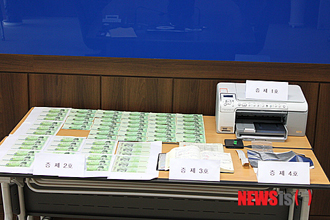 A 49-year-old man in Gimpo used his home color printer to run off fake 10,000 won ($9.22) notes and passed them off as real over the past three years, mainly at traditional markets.

The Gimpo Police Precinct in Gyeonggi arrested him Oct. 17.

The police said the suspect surnamed Kim allegedly copied the front and back of 10,000 won notes, cut them out and glued them together. 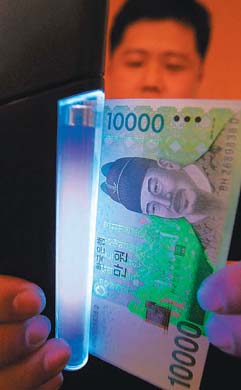 He used silver foil on the note’s front to mimic the security hologram.

Kim told investigators that he learned how to counterfeit the notes from a news program on television.

The suspect, who was unemployed, became bolder after he succeeded in passing off the notes at food stalls around his house.

Kim traveled to other provinces such as Chungcheong to use the fraudulent currency at traditional marketplaces, targeting elderly merchants, who were more easily tricked.

The police said he kept records of markets he visited, noting how many notes he spent at each.

A merchant at a Gimpo market became suspicious of a 10,000 won bill he got from the suspect last month and called police.