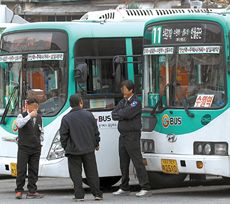 Bus service in Seoul returned to normal on Thursday after drivers staged a brief walkout in protest against a National Assembly bill meant to increase financial benefits to taxi companies.

The National Association of Bus Companies said bus service nationwide was normalized as of 6:20 a.m. Earlier in the day, almost all of some 7,500 buses running on more than 360 routes in Seoul to transport approximately 5 million passengers every day stopped running.

The controversial bill, which calls for recognizing taxis as a means of public transportation, unanimously passed parliamentary committees until Wednesday and now waits for approval in the parliamentary plenary session, amid opposition from the government.

Expressing strong opposition to the move, the bus association has threatened to go on an indefinite strike if the bill is finally approved by parliament.

The bill, if adopted, will put cab companies and drivers under semi-state management, which means the government determines taxi drivers' salaries and other operational details.

In lieu, the drivers will be guaranteed a stable income and the companies will be eligible for government compensation for losses, all of which would come from state coffers.

The bus industry receives an annual 1.2 trillion won (US$1.1 billion) in various subsidies from central and local governments, and cab firms 760 billion won.